In this project we develop Polar Cap Products (PCP) based on the in-situ data from the Swarm satellites. PCP will provide essential information on polar cap patches, which are an important element of the space weather in the polar regions. The project is supported by the European Space Agency, through STSE Swarm+ Innovation. 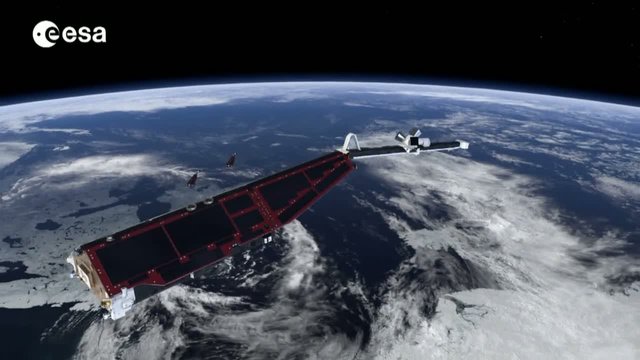 In this project we develop Polar Cap Products (PCP) based on in-situ data from the Swarm satellites. PCP will provide essential information on polar cap patches, which are an important element of space weather in the polar regions. PCP will allow establishing models for the space weather forecasting at high lattitudes.

Swarm is the fifth Earth Explorer mission approved in ESA's Living Planet Programme, and was successfully launched on 22 November 2013. The objective of the Swarm mission is to provide the best-ever survey of the geomagnetic field and its temporal evolution as well as the electric field in the atmosphere using a constellation of three identical satellites carrying sophisticated magnetometers and electric field instruments. The three satellites orbit the Earth at altitudes between 460 and 530 km above the Earth. They orbit around the Earth 15 times per day at an inclination close to 90 degrees. Therfefor, they provide measurements of the ionosphere in the polar regions.

Each of the satellites carries the following instruments:

EFI contains the Suprathermal Ion Imagers and the Langmuir probe. It provides measurements of the electron density and temperature, and ion flow velocity. This is the main instrument used in this project.

Polar cap patches are regions of enhanced plasma density in the ionospheric F region inside the polar cap, i.e., poleward of the auroral oval. The plasma density of polar cap patches is more than twice that of the background. Polar cap patches are convected over the magnetic poles from the dayside towards nightside. While travelling they are subject to instabilities (e.g., gradient drift instability), and thereby become structured. The resulting plasma irregularities can have negative consequences on the communication with satellites - they lead to scintillations of satellite signals and influence the reliability of Global Navigation Satellite Systems (GNSS), such as Galileo, GPS, or GLONASS. Scinitllations in the polar regions can lead to navigation errors and even satellite-based navigation failure. Thus, polar cap patches are an important part of space weather, which has an increasing impact on today's society.

The results of the project are available as overview plots (an example is shown below), or data files. Please click here to access the results.

The project is financed by the European Space Agency, Support To Science Element (STSE) Programme, which is an element of the ESA's Earth Observation Envelope Program (EOEP-4) aiming to reinforce the scientific component of the ESA Living Planet Programme. The Swarm+ Innovation is the set of activities dedicated to support the scientific exploitation of Swarm on key scientific topics such as nowcasts and forecasts of space weather phenomena, ocean applications (e.g., general ocean circulation and its seasonal variations) or mass changes in combination with GOCE and GRACE.