A seminar with the title: Connecting Atmospheric Blocking to European Temperature Extremes in Spring, is to be held Thursday 15th June. Speaker is Lukas Brunner from the University of Graz, Austria.

This open seminar is provided by the research group LATICE. 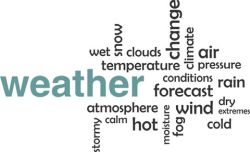 The weather in Europe is influenced by a range of dynamical features such as the Atlantic storm tracks, the jet stream, and atmospheric blocking. Blocking describes an atmospheric situation in which a stationary and persistent high pressure system interrupts the climatological flow for several days to weeks. It can trigger cold and warm spells which is of special relevance during the spring season because vegetation is particularly vulnerable to extreme temperatures in the early greening phase.

We investigate European cold and warm spells in the 36 springs from 1979 to 2014 in temperature data from the European daily high-resolution gridded dataset (E-OBS) and connect them to blocking derived from geopotential height fields from ERA-Interim. A highly significant link between blocking and both, cold and warm spells is found that changes during spring. Resolving monthly frequencies, we find a shift in the preferred locations of blocking throughout spring. The maximum blocking frequency during cold spells shifts from Scandinavia to the British Isles in March and April. During warm spells it continuously shifts further northward during the spring season.

The location of the block is found to be essential for the sign of the relationship. Blocking over the north-eastern Atlantic and over northern Europe is strongly linked to cold conditions, while blocking over central Europe is associated with warm conditions. Consistently the spatial distribution of temperature extremes across Europe is highly sensitive to the occurrence of blocking. More than 80 % of cold spells in south-eastern Europe occur during blocking, compared to less than 30 % in northern Europe. Warm spells show the opposite pattern and more than 70 % co-occur with blocking in northern Europe, compared to less than 30 % in parts of southern Europe. We find considerable interannual variability over the analysis period from 1979 to 2014 but also a decrease in cold spells and an increase in warm spells, especially in the last 15 years, indicating the influence of global warming. The change to a warmer environment holds the potential for even higher vulnerability to cold extremes, which can be triggered by blocking in late spring.

The seminar is open for all interested in the topic of the seminar.