A seminar with the title: Uncertainty in projections of future terrestrial carbon cycling, is to be held Monday 9th of October. Speaker is Danica Lombardozzi, NCAR.

This open seminar is provided by the research group LATICE. 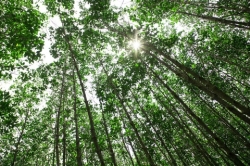 Earth system models simulate prominent terrestrial carbon-cycle responses to anthropogenically forced changes in climate and atmospheric composition over the twenty-first century. The rate and magnitude of the forced climate change is routinely evaluated relative to unforced, or natural, variability using a multi-member ensemble of simulations. However, Earth system model carbon-cycle analyses do not account for unforced variability. To investigate unforced terrestrial carbon-cycle variability, we analyse ensembles from the Coupled Model Intercomparison Project (CMIP5), focusing on the Community Climate System Model (CCSM4). The unforced variability of CCSM4 is comparable to that observed at the Harvard Forest eddy covariance flux tower site.

Over the twenty-first century, unforced variability in land–atmosphere CO2 flux is larger than the forced response at decadal timescales in many areas of the world, precluding detection of the forced carbon-cycle change. Only after several decades does the forced carbon signal consistently emerge in CCSM4 and other models for the business-as-usual radiative forcing scenario (RCP8.5). Grid-cell variability in time of emergence is large, but decreases at regional scales. To attribute changes in the terrestrial carbon cycle to anthropogenic forcings, monitoring networks and model projections must consider the timescale at which the forced biogeochemical response emerges from the natural variability.

Danica Lombardozzi is a project scientist at Climate and Global Dynamics Laboratory, National Center for Atmospheric Research (NCAR), Boulder, Colorado, US. Her research interest is investigation of carbon, water, and energy fluxes between Earth’s surface and the atmosphere, focusing primarily on plant responses to air pollution and climate. Her work combines field measurements and data syntheses with global-scale modeling to understand the mechanisms governing these processes at different spatial and temporal scales.

The seminar is open for all interested in the topic of the seminar.