Our e-mail lists are handled by the Secretariat. Contact Åsgeir Seland.

Check which lists exist on the lists page. Here you will also see which lists you  subscribe to. Unless a person doesn't have a UiO account, we insist that the UiO e-mail account is the address on the UiO list. 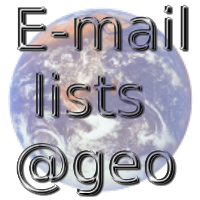 A list of our e-mail lists are at sympa.uio.no/geo.uio.no/lists

By Arnstein Orten, Kjell Andresen
E-mail this page
UiO > The Faculty of Mathematics and Natural Sciences >
Department of Geosciences > Services and tools >