Peder Sather Grant to André Laestadius and Mihály A. Csirik 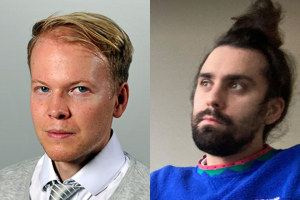 Quantum chemistry is considered to be the primary field of application for the near-term quantum computers. often referred to as nosiy intermediate-scale quantum (NISQ) devices. As part of the variational quantum eigensolver, the unitary coupled-cluster (UCC) method, and its variants, are the most common algorithms utilized for the simulation of chemistry on such devices. The UCC approach is a unitary variant of the single-reference coupled-cluster (CC) method, which is a high-accuracy wave-function method for classical computers. Unlike the UCC approach, the standard CC approach is not unitary, and can therefore not be directly implemented on a quantum device.

Prior to the increasing interest in quantum devices, the UCC approach has not enjoyed much attention as it is numerically infeasible on classical devices. Consequently, its mathematical analysis is almost non-existing.

The groups in Oslo and Berkeley specialize in quantum chemistry, in particular, the development of algorithms on classical and quantum devices, as well as their mathematical analysis. The Berkeley group has in particular profound experience in the analysis of CC-type methods as well as method development and analysis for quantum simulations, while the Oslo group has recently generalized the mathematical framework for CC theory.

The goal of this project is to analyze UCC theory using algebraic geometry and topological degree theory. The principal investigators of this project are André Laestadius and Mihály A. Csirik at the Hylleraas Centre in Oslo and ass. prof. Lin Lin at the Department of Matehmatis, UC Berkeley. A key personnel is also Fabian M. Faulstich, a previous PhD student at the Hylleraas Centre, now at UC Berkeley.

In their own words: "Indeed, we believe that this interdisciplinary proposal, combining mathematics and quantum chemistry, has the potential of leading to long term and productive interactions between the groups in addition to novel scientific results."

The Peder Sather Centre is an international research and educational collaboration between UC Berkeley and Norway:

"The Peder Sather Center for Advanced Study supports projects carried out by researchers at UC Berkeley in collaboration with researchers from eight Norwegian universities. The Center offers grants of between $10K and $25K. Funds are made available for two academic years.  Grants can support activities such as workshops, mini-conferences, virtual intellectual exchanges, the undertaking of exploratory and pilot studies, activities such as PhD student exchanges, longer-term stays for Principal Investigators, the collection and analysis of data, and other core research activities."