Into the lab: virtual visits of four model organism facilities

This year Viola Lobert, who teaches genetics and developmental biology at the Department of Biosciences, has made virtual lab tours of four model organism facilities to introduce her students to the wonders of development, but also to give them a taste of what it’s like to do experiments in a lab. 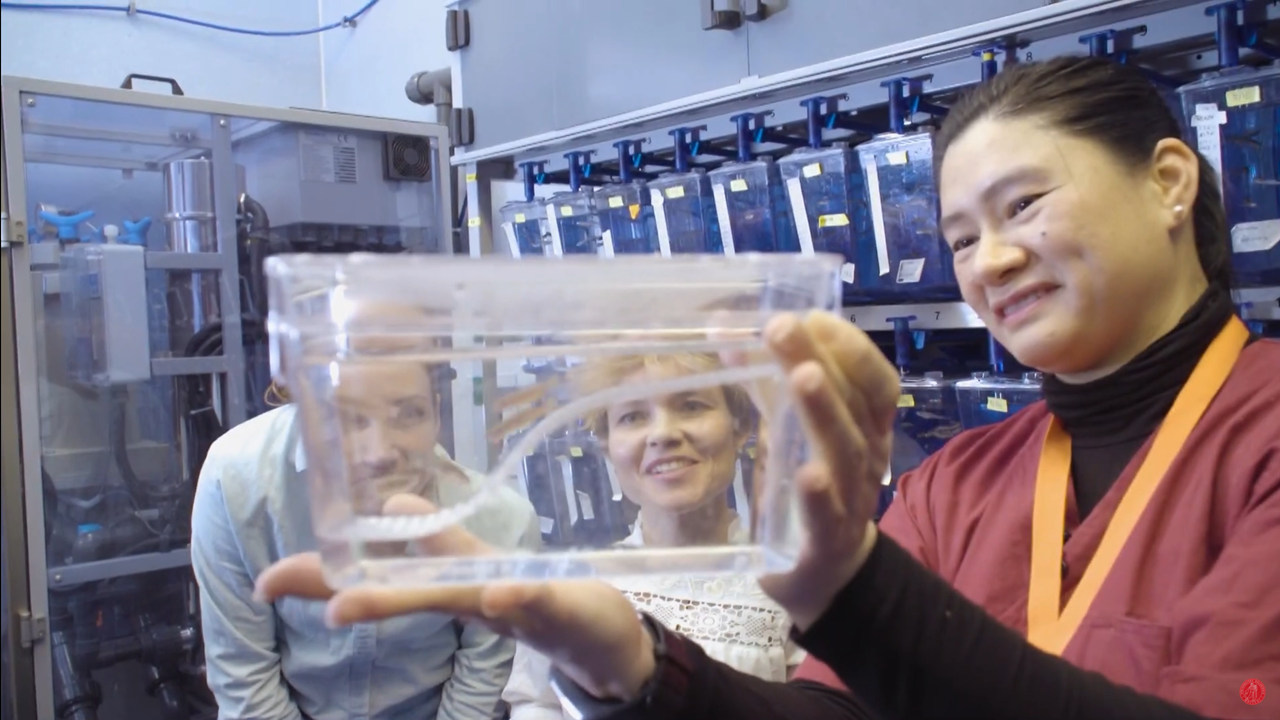 Have you been wondering what it’s like to work in a lab? With more focus than usual on scientists due to the current pandemic, I don’t think you are the only one. A lot of the work that allows us to understand how the body works is thanks to model organisms, non-human animals that have been studied for decades, in some cases hundreds of years.

What is a model organism?

To qualify as a model organism, the animal needs to fit a set of requirements. First, it needs to have a short generation time, which means that the time from birth until being able to reproduce is short. It needs to be small, so as not to take up too much space in the facility, as this impacts low cost, which is further affected by what it eats and how much care it requires.

A successful model organism also needs to create lots of offspring, because let’s face it, there are many research questions left to address, and you need many embryos to test those. Finally, the process you want to study needs to be conserved in the model organism you have chosen. After all, you can’t study breast development in a fish, right?!

The importance of protection

Research using animals is not something recent, and Aristotle, who lived 384-322 BC, was one of the first to use animals in experiments. Research using animals has over the years allowed the eradication of diphtheria, the discovery of insulin for the treatment of diabetics, and a near-eradication of polio. Importantly, researchers became aware early on that rules needed to be implemented to protect animals, so as to regulate the way research animals were treated (Cruelty to Animals Act, 1835).

Today, most countries have a national agency that handles all research applications on sentient animals (animals that are deemed to feel pain, such as fish and higher vertebrates). In Norway, this is handled by the Norwegian Food and Safety Authority (Mattilsynet), and all researchers who intend to perform experiments on vertebrates need to take a course, which teaches the 3 Rs in animal research – Replacement, Reduction, Refinement. So don’t go around thinking that researchers don’t care about what they do to animals – this is a highly regulated process, and only necessary experiments are performed on animals.

The discovery of grid cells

So, what are some of the animals that satisfy these requirements? You probably know of the mouse as well as the rat. After all, a lot of media attention has surrounded these model organisms because they have been used for a long time, but not least thanks to the Moser & Moser researchers, who received together with John O’Keefe the Nobel Prize in Physiology or Medicine in 2014 (nobelprize.org) for their discovery of grid cells. However, when it comes to understanding the biology of development, four model organisms play an important role.

This semester, students who took the Genetics and Developmental Biology BIOS3601/4601 course at the Department of Biosciences at the University of Oslo learned all these things and much more. A group of lecturers including Paul Grini, Tor Erik Rusten, Jon Bråte, Pooja Kumari and Viola Lobert introduced the students to the study of development, using knowledge gained from research using model organisms.

Well, it’s what earlier scientists called embryology, the development of the embryo, but we know today that development is not limited to the embryo. In fact, it also occurs later in life, during regeneration. If a salamander loses its limb for example, it will regrow back without scarring. The students learned about vertebrate as well as invertebrate development, plant development, how movements of cells contribute to shaping the embryo, what stem cells are, how organs form, how growth is regulated and about the evolution of development.

The connection between cancer and genes

Viola Lobert usually invites the students from this course to come and visit the Institute for Cancer Research (ous.no), where she works at the Department of Molecular Cell Biology. Viola shows the students cells, fruit flies, the microscopes they use, and talk about the similarities between development and cancer. Because this is one of the things the students have also learned throughout this course – that a lot of the knowledge we have on which genes are important for development are in fact important for cancer. Cells in the embryo divide, move, and send signals in the same way as the developing tumour – except that they do so in a more organised fashion.

This year the visit to the Institute for Cancer Research was not possible due to the pandemic, so instead Viola decided to organise a virtual lab tour. And to make it even more interesting than in previous years, she decided to visit four labs, which house different model organism facilities, so as to give the students a taste of what it’s like to work with the four most common model organisms.

To get a student’s perspective on these model organisms, Riccarda (Ricci) Schimanski joined her in the different labs, and they not only learned how to take care of these animals, but how to do experiments using them, what is unique about them, and what sort of research can be done using them.

So, take a look at the videos, and Viola hopes you will learn something about developmental biology, but also what it’s like to work in a lab. And who knows, perhaps this might inspire you to consider studying a research topic using one of these model organisms?