In collaboration with the UiO Department of Biosciences and the UiO science library, VEGA scene is showing the 2019 film Dark Waters throughout June. 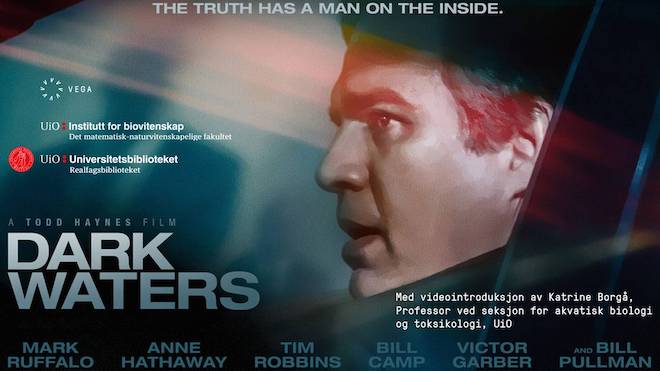 The film tells the dramatic story of a lawyer suing industry giant DuPont, shedding a light on local pollution from the chemical PFOA. Before each screening, a short recorded introduction by our group leader Katrine Borgå sets the movie in perspective of its relevance and high actuality.

Todd Haynes Dark Waters film stars Mark Ruffalo and Anne Hathaway and is based on the article "The Lawyer Who Became DuPont's Worst Nightmare". It follows the true story of lawyer Robert Billott as he takes on a case for farmer Wilbur Tennant, who suspects a recent spate of deaths amongst his heard of cows is being caused by pollution from a nearby factory owned by chemical producer DuPont in Parkersburg, West Virginia, USA.

Throughout the film, we follow Billott as he discovers a chemical called PFOA and its potential negative health effects and uncovers the extent to which DuPont had been aware of its adverse effects since the 1960s, but continued its production and unsafe disposal. However, due to a policy of self-regulation, under which the industry and producers themselves are responsible for identifying any contaminants they release and declaring their effects to authorities, the American Environmental Protection Agency (EPA) was unaware of the contamination, which led to pollution of the local community and an unregulated usage of PFOA for decades.

PFOA has been used in ski wax, Teflon, water-resistant jackets, make-up, and fire-fighting foam, and can cause multiple adverse health effects, such as impaired immune system and increased susceptibility of various types of cancer. This chemical slowly degrades in nature and has been found all over the globe, even in remote areas such as the Arctic and its ecosystem, including polar bears.

PFOA has recently received attention in Norway after high levels were found around Norwegian skiing areas and airports. PFOA has been banned in most consumer products in Norway since 2014, with some exceptions, and is banned in Europe from July 4th, 2020. In addition, Norway, together with Sweden, Denmark, The Netherlands, and Germany has proposed that all 5000 PFAS are banned, and not only PFOA.

During a closed screening of Dark Waters for the Borgå group, we were joined by Norwegian public broadcaster NRK, who interviewed Professor Borgå and several of our group members for their popular science program Ekko.

The film is definitely a must-watch for anyone interested in environmental pollution, and offers an intriguing insight into the world of environmental regulation and raises some important issues on the importance of external regulation of what can be a very powerful industry.

Tickets for screenings of the movie at Vega Scene can be found here: https://vegascene.no/incoming/article1430241.ece

The original New York Times article on which the film is based can be read here: https://www.nytimes.com/2016/01/10/magazine/the-lawyer-who-became-duponts-worst-nightmare.html