UiO The Faculty of Mathematics and Natural Sciences Department of Biosciences
Main navigation
Back to uio.no
Sub navigation Menu
People > Academic staff > Katrine Borgå > News and Blog > Recent activities in the AnthroTox project and the world of E-waste

The Norwegian Environmental Agency (Miljødirektoratet) has in a recent report to the Ministry of Environment suggested several measures to deal with the illegal transport of used electronics and Electronic waste (E-waste) from Norway. The E-waste topic was also central during the workshop “Pollution: Monitoring and Policy” organized by members of the AnthroTox project during the Oslo Life Science Conference held earlier this spring. Participants as well as the organizers of the workshop learned how international regulations on pollutants, e.g. the Stockholm and Basel Convention, are followed up in Tanzania and Norway.

Invited speakers at the workshop represented different disciplines, including social anthropology as well as governmental agencies, all with different experiences and perspectives on the topic of monitoring and policy. Central in our discussions on environmental pollution was the Stockholm Convention, which is a global treaty aiming to regulate and eliminate production and use of pollutants. Ramón Guardens presented his experiences working closely with the Stockholm Convention, as well as perspectives on spatial and temporal aspects of environmental pollution. Aboud Jumbe from the Environmental Agency on Zanzibar gave a presentation on national priorities in Tanzania, and his experiences from working with pollution issues on Zanzibar. We learned that import and sales of E-waste is increasing on Zanzibar. 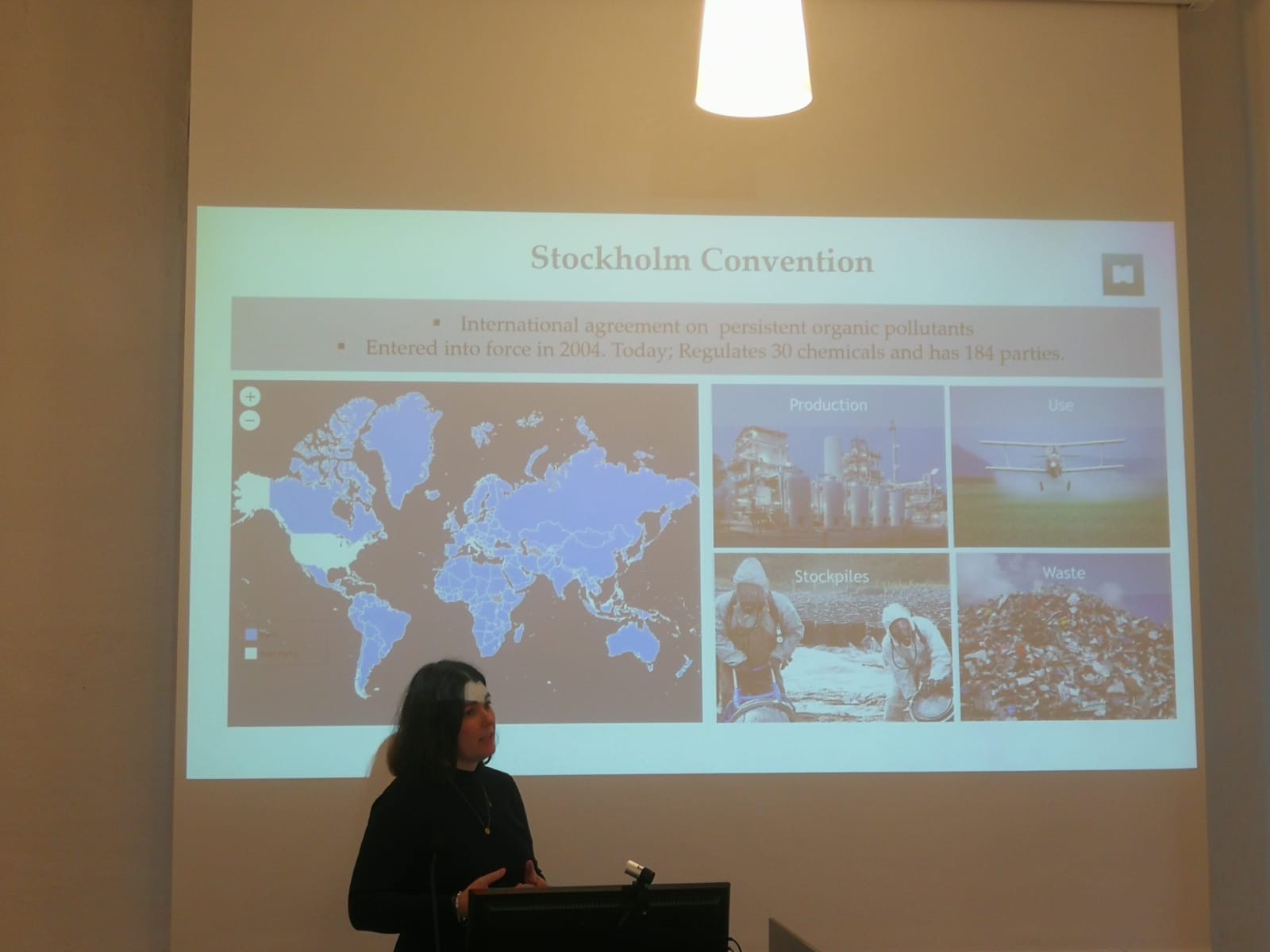 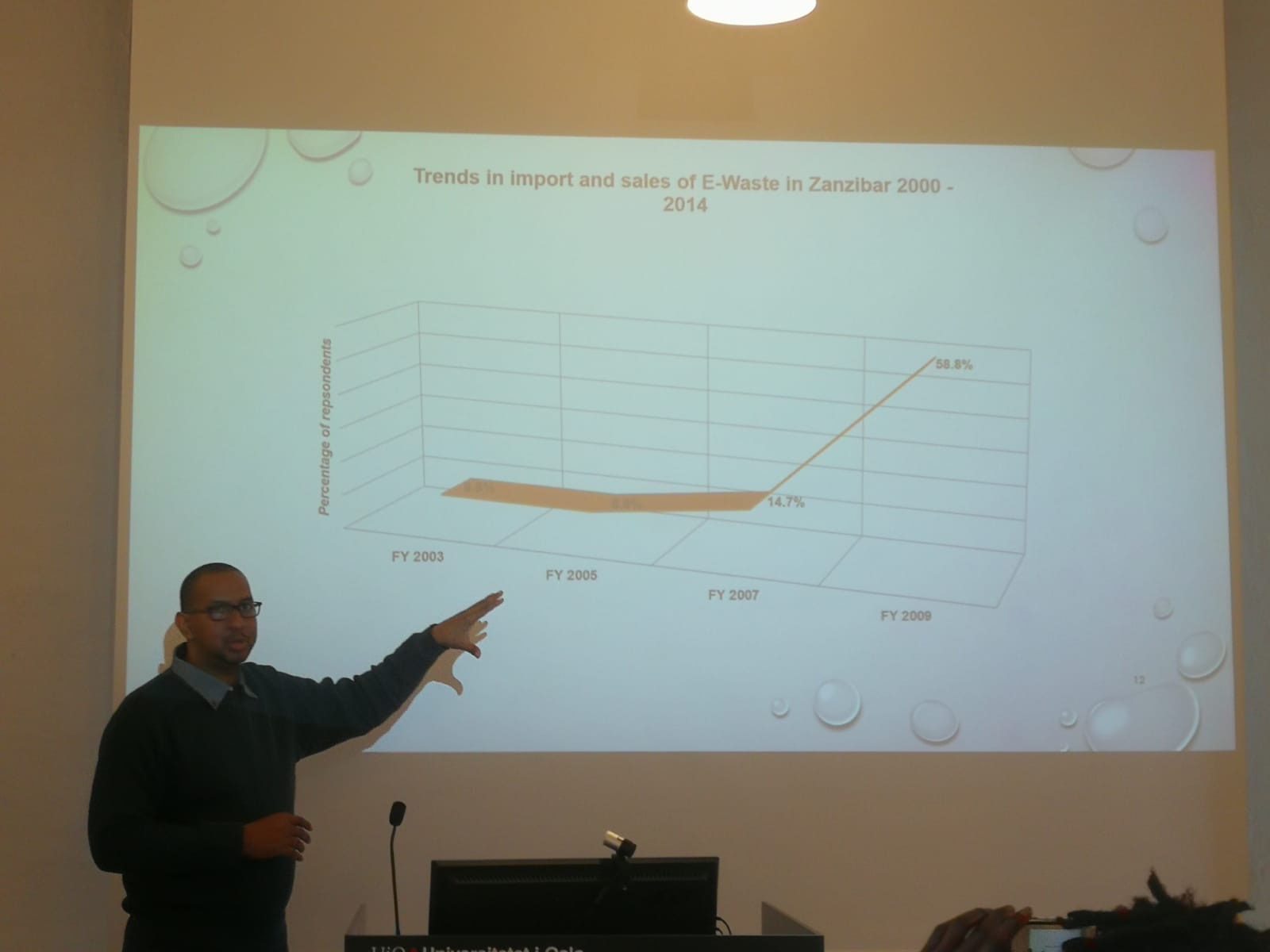 Globally, E-waste is defined as the fastest growing stream of waste, and Norway is currently holding the world record in E-waste production per capita. The documentary “Søppelsmuglerne”, or (directly translated) “Waste-smugglers”, broadcasted by NRK last fall, documented an extensive chain of illegal trade of E-waste from Norway to Africa. The documentary showed how used electronic products delivered to designated return stations by Norwegian customers are picked up by the “smugglers”, and how old cars are being filled with waste before the car is shipped by boat to Africa via other European countries. This transboundary movement of waste is illegal, but it is impossible to control and ensure the function and quality of all the cars and products inside. Thus, waste is transported away from the countries that should be responsible for its safe recycling. Sound disposal and recycling of E-waste is costly, and E-waste ending up in developing countries are often subjected to crude dismantling and open burning. This results in the release of a range of hazardous contaminants causing harmful effects to humans and the environment.

During the workshop, an invited speaker from the Norwegian Environmental Agency could explain how they are currently looking into how to prevent E-waste from being picked up at return stations and transported across international borders. As stated in their letter of recommendation to the Ministry of Environment, cooperation between national and international agencies is important to be able to control, regulate and also prosecute violations in all steps of this complex chain of trade. For more details, check out the article (in Norwegian) at the environmental agencies’ webpage here: https://www.miljodirektoratet.no/aktuelt/nyheter/2020/mars-2020/ulovlig-eksport-av-ee-avfall/

In the AnthroTox project we work with understanding the drivers and consequences of environmental pollution from E-waste. As a PhD candidate in this project I find it very motivating when this highly relevant and important issue, which is also the topic of my PhD, is getting such broad attention!

By Ane Haarr
E-mail this page