How are Norwegian killer whales related, and how does this align with their dietary preferences? Genetics will tell! 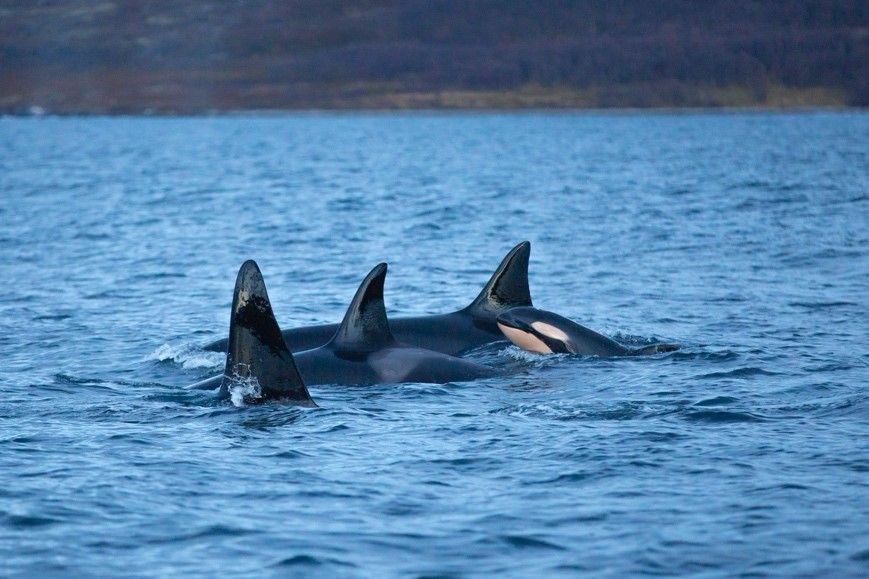 Focus on social and genetic structure

Part of my work as the postdoctoral researcher in MULTIWHALE investigates social organization of killer whales in Norway. To do so, I am using photo-identification and association data (i.e., what whale associates with whom and how often) collected over multiple years in Norway. I am also investigating genetic relatedness within and among photo-identified killer whale groups. The results will be compared to dietary patterns (diet of the different groups, known from our previous work) and to identify whether ecological structuring coincides with social and genetic structuring in Norwegian killer whales.

We know that diet influences pollution levels and inherent exposure to risk for health effects in killer whales. For instance, killer whales feeding on marine mammals accumulate higher levels of contaminants than killer whales that only eat fish. Marine mammal-eating killer whales are thus exposed to higher risks of health effects. It means, due to differences in feeding habits, ecological groups may be impacted differently by anthropogenic stressors such as chemical pollution. Ultimately, if ecological groups were to have different survival and reproductive rates, they could very well have different demographics. This could have further consequences for the dynamics and growth of the population as a whole. In MULTIWHALE, the objective is to assess the effects of multiple stressors at the individual and population levels, accounting for ecological variations and potential structuring.

A lot has happened since our research project MUTLIWHALE started earlier this year. While June was busy mostly with planning, organizing, and refining protocols, July and August gave us new opportunities to be in the field with killer whales. Despite challenges (those really are a characteristic of fieldwork, aren’t they?), we could collect biopsy samples and lots of photo-identifications. A biopsy sample consists in a 2-3 cm piece of skin and blubber which is collected remotely (from the boat) using a dart and a mounted tip, fired by a riffle. Biopsy sampling is minimally invasive and has been used routinely in cetacean research worldwide.

The biopsy samples collected this summer were added to the bank of biopsies collected by Norwegian Orca Survey since 2017. Thus, with already much tissue material available, we are ready to kick-start the first round of lab analyses, starting with genetics now in September. But before getting this far, an important step already took place back in August – that was, preparing the biopsies for the lab.

Biopsy samples are challenging to obtain and, ideally, we want to conduct multiple analyses on each. Therefore, to make the most out of the tissue collected, each biopsy must be split (“sub-sampled”) into pre-determined amounts of tissue to be used for the various target analyses. Parts of the biopsies will also be shipped to the various labs of our national and international collaborators, hence the importance of dividing the samples.

In August, my colleague Clare (PhD candidate in MULTIWHALE) and I spent 14 hours in the lab sub-sampling killer whale biopsies. The goal was to ensure that each analysis was allocated enough tissue and that we had a tube containing a sub-sample of each biopsy ready to be transported to the genetics lab by September. Sub-sampling was done following a strict protocol and in a laminar flow hood to reduce the risk of contamination by environmental pollutants, such as chlorinated paraffins.

Now, the most exciting part has come! Currently at the Norwegian University of Science and Technology (NTNU) in Trondheim, I will be working on genetics in our killer whale skin samples together with Dr. Andy Foote for the next two weeks. More to come!

By Eve Jourdain
E-mail this page