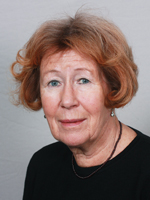 I have an interest in the general biology of microorganisms.

I have always been interested in the physiology, biochemistry and molecular biology of various phototrophic bacteria. The recent years I have especially worked with proteins from phototrophic bacteria living at a high temperature in hot springs. I have also worked on more applied projects in industrial collaborations, to develop rapid molecular methods to detect bacteria in drinking water.

MBV4130- The biology of the prokaryotes

M.Sc. in microbiology from Vassar College, N.Y,  1968. Thesis about sporulation in Bacillus.

Member of the board of Centre for Ecological and Evolutionary Syntethsis (CEES), UiO

Member of the prize committee for a good learning environment, UiO

Presently I collaborate with groups at the Norwegian Institute of Public Health in a project concerning Legionella.