PhD candidate Angélica María Cuevas Pulido at the Department of Biosciences will be defending the thesis "The evolutionary fate of a hybrid lineage - The potential for genomic differentiation in an admixed species" for the degree of PhD. 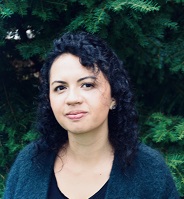 The trial lecture is: "The role of sexual selection in speciation".

The events opens for participation just before they start, and closes for new participants approximately 15 minutes after it has begun.

The vast diversity of species we encounter in nature has always fascinated scientists, thus the evolutionary processes responsible for the origin of new species (speciation) is a topic of constant interest among biologists. One special form of speciation is that of hybrid speciation, where different species interbreed generating a third, independent, hybrid species. Hybrid species present unique genetic characteristics. For instance, their genomes are mosaics of those of their parents, which could increase genetic variation, a feature that can be helpful when adapting to changing environments. However, incompatibilities between the parental genomes can present limitations in the evolution of a hybrid. Parental genomes diverge, as each has its own evolutionary history, and thus can conflict when mixed in a single (hybrid) species.

In her PhD thesis, Angélica Cuevas Pulido aimed to disentangle the relative importance of these contrasting processes in the evolution of a hybrid species, the Italian sparrow (Passer italiae). Her findings suggest that genomic incompatibilities seem to limit the differentiation among hybrid populations. Nevertheless, the Italian sparrow has also evolved in response to climatic variation in a similar way to non–hybrid lineages. This suggests ongoing local adaptation to selective pressures. Finally, Cuevas Pulido and colleagues demonstrate that species competition with one of the parental species presents strong ecological and genetic consequences in the hybrid. There is habitat segregation resulting in poorer body condition, an important drop in population size, and significant changes across 81 protein–coding genes. Thus, the evolutionary path of a hybrid species is not a deterministic one. It is contingent to the parental genomic composition (providing potential for adaptation vs. limitations due to genomic constraints) as well as to the challenges and possibilities it encounters in nature. Overall, this PhD project provides a broader understanding of the factors that can shape the evolution of a hybrid species.

Department of Biosciences
E-mail this page