The Sandlie group studies the structure and function of antibodies and T-cell receptors, the specific detection molecules of the adaptive immune system. The purpose of the work is to engineer antibodies and other molecules for use in therapy and research. 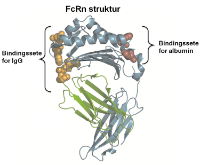 Celiac disease (CD) develops in individuals with certain MHC class II types, and in particular, DQ2.5, which is characterized by its ability to bind and present modified gluten peptides on the surface of antigen presenting cells. To answer questions regarding the nature of these antigen presenting cells in the gut of CD patients, we are designing antibodies that bind gluten-DQ2.5 complexes with very high specificity. In collaboration with Ludvig Sollid and Frode Jahnsen, we have found the antibodies to bind B cells and plasma cells in patient biopsies. We hypothesize that the interaction between these cells and disease-associated T cells is a key driver of disease. CD patients produce autoantibodies against transglutaminase 2, the enzyme that modifies the gluten peptides. Interestingly, at least some of the gluten-DQ2.5 presenting plasma cells are transglutaminase 2 specific (Høydahl et al., in revision).

The T cell response against gluten-DQ2.5 complexes is socalled biased in CD patients, in that their T cell receptors are often composed of signature variable segment pairs that must be selected on the ground of being particularly well suited for complex binding. In collaboration with Ludvig Sollid and Shuo Wang Qiao, we have unraveled the molecular basis for a common signature, and identified an MHC recognition motif centered on a certain amino acid residue in the T cell receptor. This one residue not only contacts MHC, but also directs a pivotal part of the T cell receptor to contact the gluten peptide (Gunnarsen, JCI Insight 2017).

We have established a novel phage display platform, socalled Signal Sequence Independent phage display – SSIp display. The key finding is that two viral capsid proteins, pVII and pIX, display fusion proteins extremely well, and they do so without the need for translational signal sequences (Nilssen, Nucleic Acids Res 2012)(Løset, PLoS One 2011). Importantly, we have found that the SSIp display phage particles can display not only antibody fragments and T cell receptors (Høydahl, Sci Reports 2016)(Gunnarsen, Sci Reports 2013), but also MHC class II peptide complexes, and we call the MHC class II displaying phages “Phagemers”. Phagemers bind to specific T cell receptors, and thus detect T cells based on this specificity. We have explored the use of Phagemers as diagnostic tools. SSIp display is the core technology of the spin-out company Nextera AS (www.nextera.no). Nextera AS commercializes and develops the Phagemer technology and selects binders from large phagemer libraries, the aim being target discovery for drug development.

Half life of IgG antibodies and albumin fused drugs

Most proteins in blood degrade within a few hours or days, but IgG and albumin, which are the two most abundant, are rescued from degradation and have half-lives of three weeks. This is due to the fact that they bind the neonatal Fc receptor (FcRn), and we study how FcRn binding regulates the serum half life and biodistribution of both ligands.

The long half life is important for the therapeutic success of IgG antibodies, and thus, there is an intense interest in increasing the strength of the FcRn interaction to prolong the half-life even further. The FcRn interaction is pH dependent, with histidine dependent strong binding at acidic pH and little or no binding at neutral pH. We have studied how FcRn binds IgG molecules of different subclasses, and found that IgG3 degrades faster than the others because of a slight alteration in FcRn binding kinetics (Stapleton, Nat Commun 2011). This is due to a single amino acid being arginine in IgG3 and histidine in the other subclasses. We have also engineered an IgG variant with increased binding at acidic pH (PCT/IB2017/000327). The patent was recently licensed by a large international drug development company. We have found that engineering of IgG for increased binding to FcRn may well negatively influence binding of both classical FcγRs and complement factor C1q, which ultimately results in a reduced ability to induce effector functions (Grevys, J Immunol 2015). The variant engineered by us induces effector functions on a level on par with or better than native antibody molecules.

We have also unraveled the interaction between FcRn and albumin (Andersen, Nat Commun 2012). Again, it is pH and histidine dependent as well as largely hydrophobic in nature (Sand, J Biol Chem 2014). Studies of the interaction with albumin fused to other protein sequences have then given information on how long half-life can be conferred upon albumin-fused therapeutics (Andersen, J Biol Chem 2013). We have designed albumin variants with increased binding to FcRn at acidic pH that have increased half life in rodents and monkeys (Anderen, J Biol Chem 2014). The Veltis ®technology (albumin attachment to drugs) is commercialized by Albumedix A/S, a collaborating drug development company, and involves both normal albumin and our engineered albumin variants.

FcRn is expressed intracellularly, and binds IgG taken up by fluid-phase endocytosis. It can then direct monomeric IgG to the surface of the opposite side of the cell (transcytosis) or to the side of entry (recycling). We study both processes using the natural ligands as well as engineered variants (Foss, J Control Release 2016). A new in vitro recycling assay designed by us predicts the behavior of designed FcRn-binding molecules in vivo in animal models (Grevys, Nat Commun 2017). Furthermore, we recently found that albumin is transcytosed efficiently from the apical to the basolateral side. We think this observation holds great promise for mucosal delivery of albumin based vaccines and therapeutics (Bern, J Control Release 2015).

All drug candidates must be tested in preclinical animal models, and in the case of albumin fused drugs this is complicated by the fact that rodent FcRn does not bind human albumin. Furthermore, human FcRn encoded by a transgene in mice binds the murine albumin very strongly, making it impossible for injected human albumin variants to compete for binding (Andersen, J Biol Chem 2013). Therefore, new transgenic mice are generated with human FcRn as well as human albumin by collaborator Derry Roopenian at the Jackson laboratory that hold great promise.

FcRn is the only Fc receptor required for transport of IgG across cellular barriers and placenta (Mathiesen, Blood 2013), and in collaboration with CIR guest professor Richard Blumbergs laboratory, we have found that it enhances antigen presentation and cross presentation in specialized dendritic cells (Baker, Pros Natl Acad Sci 2011). Furthermore, it directs albumin produced in the liver to the bloodstream, and away from the bile (Pyzik, Proc Natl Acad Sci 2017).

Antibodies are ley molecules in the fight against viral infections. Although previously thought to mediate protection in the extracellular environment, research by the group of Leo James (MRC-LMB) over the last 10 years has revealed that antibody mediated protection extends to the cytosolic compartment of non-professional cells. This post-entry viral defense mechanism is mediated by the cytosolic antibody receptor tripartite motif containing 21 (TRIM21). When viral pathogens bound by antibody enter the cytosol, TRIM21 is rapidly recruited and mediates a coordinated effector response that involve degradation of the viral particle in via the proteasome and induction of innate antiviral signaling.

In close collaboration with the James group we have studies the relationship between TRIM21 effector functions and antibody affinity. We found that while TRIM21 mediates efficient neutralization under suboptimal conditions, induction of innate signaling is balanced according to the functional affinity for the incoming immune stimuli (Foss et al., JI, 2016). This finding demonstrates that TRIM21 balances its signaling response to be proportionate to the viral treat while still being able to thwart infection.

The intracellular anti-viral defense mediated by TRIM21 relies on opsonized viral particles reaching the cytosol intact. However, the antibody-antigen binding properties required to elicit an efficient intracellular immune response has been unknown.

Using the co-crystal structure between a potently TRIM21-dependent neutralizing antibody and adenovirus 5 hexon, we together with the James group, used structure guided mutagenesis to generate antibodies with a wide range of affinities for the viral antigen. Using this system, we have defined the antigenic and kinetic constraints of TRIM21 function (Bottermann, Sci Rep, 2016).

The Sandlie group was until recently a member of the Centre for Immune Regulation (CIR). Collaboration within CIR has clearly contributed greatly to the success of our projects.

The design of research tools and therapeutics was initially motivated by the needs of our collaborators, and their research interests then triggered us to ask new questions using the tools.

Furthermore, collaboration within a translational research environment, has motivated research with clinical relevance. The CIR guest professor program has been of particular importance for us, and we have benefited from the networking opportunities, the research collaboration and the guidance given by top international research leaders. Last, but not least, the long term funding has allowed us to undertake ambitious research projects.

We collaborate closely with Jan Terje Andersen' group The Laboratory of Adaptive Immunity and Homeostasis.