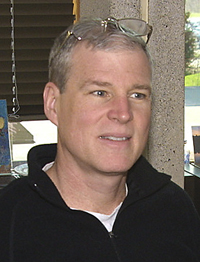 Individuals of the basidiomycete fungus Armillaria are well-known for their ability to spread from woody substrate to substrate on the forest floor through the growth of rhizomoprhs.  In the late 1980s, Smith, Bruhn, and Anderson (Nature, 1992) discovered a genetic individual (designated C1 here) of the fungus Armillaria gallica that extended over at least 37 hectares of forest floor and encompassed hundreds of tree root systems in Michigan’s Upper Peninsula. Based on observed growth rates, C1 was estimated at the time to be at least 1500 years old with a mass of more than 105 kg. The conclusion was that C1 was among the largest and oldest organisms on earth, a remarkable claim given that Armillaria is essentially a microorganism existing largely as microscopic hyphae embedded in their substrates. Nearly three decades on, we returned to the site of C1 with the tools of whole-genome sequencing (Roy. Soc. Proceedings B, 2018). We discovered that C1 is still alive on its original site, but that it is older and larger than originally estimated, at least 2,500 years and 4 × 105 kg, respectively. For these revised estimates, we relied on direct measurements of rhizomorph growth rate and on sampling of rhizomorphs in forest soil. We also showed that mutation has occurred within the somatic cells of C1, reflecting its historical pattern of growth from a single point. The overall rate of mutation, however, was surprisingly low. On the spectrum of mutability in somatic cells, Armillaria occupies the extreme of stability, opposite the extreme of instability as typified by cancer.