Every year, millions of people die from bacterial infections, and antimicrobial resistance as well as climate change exacerbate the problem. We investigate important virulence factors at the molecular level. 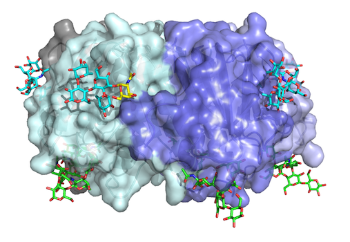 Microbes and microbial toxins dock onto cell glycans before being taken up by the cells. Here: Cholera Toxin B-pentamer, in complex with two glycan receptors, from GM1 in green and blood group antigens in cyan (Credit: Julie Heggelund).

Bacterial infections have historically killed more people than any other disease, and diarrheal disease is the second leading cause of death in small children. Cholera, which is caused by the human pathogen Vibrio cholerae, gives rise to the most severe form of secretory diarrhea. A similar, but milder disease is traveler's diarrhea, caused by enterotoxigenic Escherichia coli (ETEC).

The major virulence factors of V. cholerae and ETEC are the cholera toxin (CT) and heat-labile enterotoxin (LT), respectively. These two toxins are structurally as well as functionally related and consist of one enzymatically active A-subunit, non-covalently anchored in the center of a receptor-binding homo B-pentamer (shown in the Figure above). Our main interest relates to the receptor specificity of these toxins, which may explain the blood group association of disease. We are also curious why ETEC is a much milder disease than cholera? Finally, we want to understand the activation mechanism of the toxins by host chaperones.

The first step of infection is mediated by bacterial colonization factors. Here, our focus is on the adhesin GbpA and related colonization factors from other bacteria, which all share a catalytic domain with lytic polysaccharide monooxygenase (LMPO) activity. This enzymatic activity makes the proteins highly relevant as catalysts for the generation of sustainable fuels from industry waste products like cellulose and chitin (Costa et al., 2019).

Recently, we also started to understand why cholera is a much more severe disease compared to traveller's diarrhea caused by ETEC infections, namely because CT can be more easily disassembled by the chaperone PDI (Serrano et al., 2022). This work involves a close and highly valued collaboration with the group of Ken Teter at UCF.

Using an integrative structural biology approach, we are investigating how adhesins such as GbpA colonize different surfaces, and which conformational changes may be involved. This work on LMPOs involves the close collaboration with the laboratory of Gustav Vaaje-Kolstad at NMBU. Exciting recent results revealed that these proteins have more than one role, and are also actively involved in interfering with the host's immune system (Askarian et al., 2021).