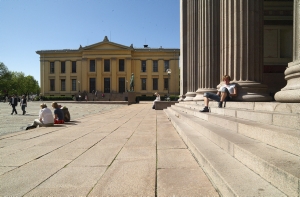 Dynamics and Evolution of Earth and Planets

CEED has recently been awarded funds for a new national research school (Forskerskole) from the Research Council of Norway (NFR).

The goal of the of the Norwegian Research School for Dynamics and Evolution of Earth and Planets (DEEP) is to educate solid Earth and planetary scientists in a holistic way, placing the Earth's structure and evolution in a comparative planetology perspective.

Norwegian geosciences institutes have had, until now, limited resources for addressing global, large-scale processes and changes related to the evolution of the core, mantle and crust and their interaction with the atmosphere and hydrosphere.

DEEP will gather the best national and European expertise and use it to educate graduate students in the following disciplines, topics and methods:

DEEP is one of seven new national research schools, which will receive 24 mill NOK over a period of 8 years from 2016 until 2023.

To prepare students for an active and interdisciplinary research life, the school will provide intensive short courses for PhD candidates at Norwegian Universities and other national and European research institutions. These courses will focus on four different topics:

The new research school is spearheaded by Stephanie Werner, Reidar Trønnes and Carmen Gaina, and will be located at CEED/GEO - Department of Geosciences at the University of Oslo.

Stephanie Werner will be Director in a 50% position, and a full-time coordinator will be appointed to manage the school.

The core group of the DEEP research school comprises several research units of the Geosciences departments at UiO, UiB, UiT and NTNU, focusing on various aspects of Earth’s evolution and dynamics and comparing with other planetary bodies.

Several additional national institutes will also also participate in or support the school according to their expertise (e.g. invited lecturers, workshops and supervision responsibilities): the Geological Survey of Norway (NGU), NORSAR, the Norwegian Defence Research Establishment (FFI), and the Norwegian Space Centre (NRS).

The scheme for national graduate-level research schools (Forskerskoler) is part of the effort to create a better framework for the training of young scientists.

They have been established to promote recruitment, to enable more doctoral candidates to complete their degrees, to reduce time to degree completion, and to enhance the internationalisation of training of researchers in Norway.

Read more at The Research Council of Norways webpages (In Norwegian)