UiO The Faculty of Mathematics and Natural Sciences The Centre for Earth Evolution and Dynamics
Main navigation
Back to uio.no
Sub navigation Menu
About the centre > News > News > 2016 > Italian earthquakes and risk management 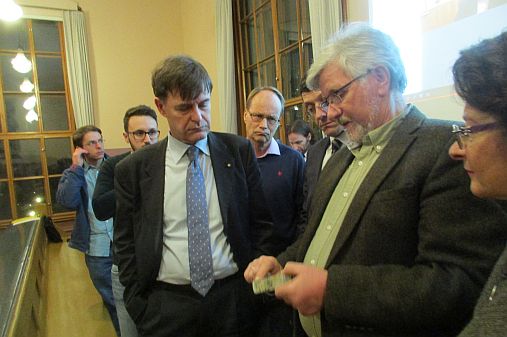 As a part of the lecture Andersen could show several rock samles which all had been through an earthquake and had been trough a melt and congeal process. Photo: CEED/GKT

A short seminar on risk and management of earthquakes

The theme for the seminar was earthquakes, which is a major natural hazard with tremendous consequences when they happen. Recently the central parts of Italy have experienced a number of severe earthquakes causing approximately 300 deaths.

To be aware of the earthquake risk and to plan and to build houses and other constructions accordingly is necessary to control the risk involved with this kind of natural hazards. The seminar therefore involved experts from several areas to highlight some of the problems involved with hazards and risk.

One of the experts presenting was Professor in geology Torgeir B. Andersen, who has worked with Italian researchers on the tectonics of the area between Corsica and Italy and particularly to understand earthquake faulting. He discussed when and where earthquakes happen and discussed the nature of faulting in the area from a plate-tectonic perspective. As a part of the lecture Andersen also showed several rock samples produced by earthquake faults. High temperature and melting can take place during rapid movements on such faults. The interested audience could also take a closer look to the samples after the lecture.

The event was organized in the framework of the initiative of the Italian Embassy in Oslo “Under the Sign of Excellence”.