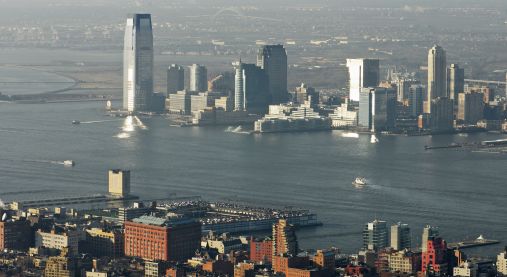 According to a new study is the global sea level rising faster than previously thought. The accelerating sea level will have impact on coastlines around the world.  Several of the World’s largest cities are near a coastline, here New York. For others see U.N. Atlas of the Oceans.  Illustration photo: Colourbox.com

While altimeters on board of satellites are now monitoring sea levels consistently around the globe, before their launch in 1992 only information from a network of tide gauges along the coast constrains changes in sea level. However, tide gauges measure sea level at specific locations relative to the ground and are contaminated by both vertical land motion of the Earth and regional variability resulting from wind redistribution, ocean circulation changes, and gravitationally triggered mass redistribution caused by melting of ice.

In addition there is a geographical bias in the availability of tide gauges, especially in the earlier decades of the 20th century. The makes it challenging to estimate a global average that is not contaminated by local deflections occurring in better covered regions.

Corrections to the tide gauge dataset

The large discrepancies between earlier global mean sea level reconstructions (1.3 – 2 mm/yr) have puzzled researchers, especially because the reconstructions showing larger rates of rise before 1990 are inconsistent with independent observations and attempts to model individual contributions such as thermal expansion or glacial and polar ice melt.

The research team took a closer look at the available tide gauge records and the potential contamination factors.  They selected only the longest and high quality tide gauges, which best cover certain regions of the global ocean. They corrected each of these tide gauges for all potential contamination factors before averaging them into a global mean. After the corrections, the new reconstruction of the sea level show a significantly slower global mean sea level rise before 1993, while afterwards the reconstruction continues in concert with the independent observational record from satellites.

– The most sensitive factor was the vertical land motion correction”, Professor Guy Wöppelmann from the University of La Rochelle, France, adds.

“While former reconstructions could only correct for one particular process of vertical land motion, namely glacial isostatic adjustment, we were now able to add other local effects”, Guy Wöppelmann further explains.

In most regions these contributions have, together with some methodological adjustments, resulted in a significant downward correction of relative sea level rates before 1990 (1.1 mm/yr).

As a result of this downward correction before 1990, the entire shape of the global mean sea level curve changed significantly. Due to the flatter character at the beginning and the unaltered high rates during the last two to three decades, the 20th century acceleration becomes more pronounced. A higher acceleration, in turn, suggests a stronger sensitivity of sea level to global warming, which has accelerated due to anthropogenic factors since the 1970s as well. “Such acceleration is now more consistent with our understanding of individual processes contributing to the observed sea level rise.

Over the 20th century as a whole, mountain glacier melting and thermal expansion have dominated the global mean sea level development. This has changed in the last decades, when the ice sheets started to funnel more and more mass into the oceans. Nowadays the contributions of the ice-sheets have already outpaced the contribution of mountain glaciers. Since the ice-sheets store 100 times more sea level equivalent than glaciers, their increasing contribution to the whole threatens many coastal locations around the world”, Sönke Dangendorf summarizes.

The rising sea level threaten coastlines over the world – including Norway

The accelerating sea level has implications for coastal environments and for the future.  One of the researchers behind the new study is Professor Clinton F. Conrad from the Centre for Earth Evolution and Dynamics (CEED) and the Department of Geosciences, University of Oslo. He stresses the findings in the article.

– Current estimates of up to 1 meter of global sea level rise in the next century are based on previous studies, which show slower rates of acceleration than we have measured. So, we may have to revise these future projections upward, which is important for coastlines around the world. Much of Norway’s coastline is actually experiencing sea level drop right now because the ground surface is still rising in response to the last ice age. However, if the accelerations such as we are observing continue into the future then Norway’s coastlines will experience significant sea level rise, which would affect many communities along the coastline.

This study of rising sea level is carried out in a cooperation of 6 scientists in Earth Science from different academic institutions in Europe. The findings in this article are based on a study published in the American scientific journal Proceedings of the National Academy of Sciences (PNAS).

Better data shows us that sea levels are rising faster than we thought, Fusion, 24.05.2017

The sea is rising three times faster than we thought. Global sea-level rise before 1990 was smaller than previously thought. phys.org 23.5.2017