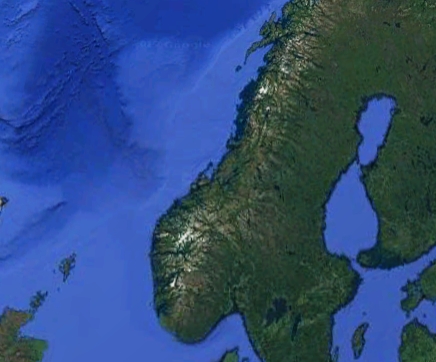 The two articles exploring geological conditions on the sea floor. One from the Møre-bassin and the other from the sea floor outside Scotland. Image: Google Earth

The scientific geophysical journal "Interpretation" is published jointly by the American Association of Petroleum Geologists(AAPG) and Society of Exploration Geophysicists(SEG). The articles from the newly graduated geophysicans are included in a theme section in the journal.

The articles were published online in May/June, but were submitted in 2016. The two articles are based on the students master’s theses, and Sigurd and Syahreza are first authors. It is not everyday that newly graduated master students publish in an international scientific journals.

The scientific journal Interpretation includes articles directly related to the practice of interpretation of the Earth’s subsurface for exploration and extraction of mineral resources and for environmental and engineering applications.

Congratulations to Sigurd and Syahreza!