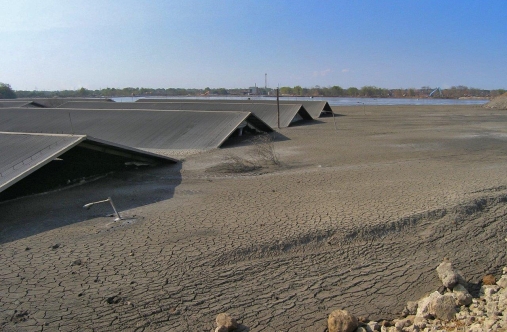 The Lusi mud eruption in 2006 forced nearly 60,000 people to flew from their homes, and buried some villages 40 meters (130 feet) deep in the mud. The relentless sea of mud from Lusi still continues, and researchers cannot predict the end of the eruption. Photo: Adriano Mazzini/The Lusi-Lab.

In May 2006 several mud eruptions started in the northeast of Java. Three months later, enough mud to fill 72 Olympic size pools daily had flowed out of the system.

Indonesia is made up of thousands of volcanic islands, and still has powerful volcano systems underneath the surface. Just after the Lusi eruption in 2006, surrounding villages were flooded with mud, and nearly 60,000 people were forced to flee.

Lusi is still active and gas, water, sludge and masses flow continuously from it. Today, Lusi covers an area of 7 square kilometers, surrounded by ramparts of 10-12 meters in height.

Areas nearby Lusi are densely populated, and the seismic activity of Lusi and Java, as well as heavy rain especially during the monsoon season, are associated with danger for those living around Lusi.

A closer study of Lusi

The volcanoes on Java have been of research interest for Adriano Mazzini at CEED and Department of Geosciences ever since Lusi started in 2006.  Adriano Mazzini and his Lusi-Lab- team are now able to link this volcano to another major volcano system nearby – The Arjuno-Welirang complex. However the volcanoes are of different type.

Lusi has a nearly flat morphology (elevation up to 10 m) and erupts mud, rocks, water, and gas and it is rooted in a petroleum-rich sedimentary basin. In contrast the Arjuno-Welirang complex is a ~3000 m high twin stratovolcano displaying a typical conical shape. It is built up by many layers (strata) of hardened lava and volcanic ash and subsurface active magma chambers.

Volcanoes connected in a system

Java is a volcanic island in Indonesia. There are 141 million people living on the island, equivalent to about 57% of the country’s population. Indonesia's capital Jakarta is in the west of Java.

A seismometer is a device that detects seismic waves caused by earthquakes or explosions in the ground.

A stratovolcano is a type of volcano that is made up of several layers of hardened lava and volcanic ash, and it has underlying active magma chambers.

In 2013 Mazzini won a European Research Council (ERC) Starting Grant financed by the European Commission (‘Lusi-Lab’), and for two years they deployed a regional network of 31 seismometers around Lusi and the volcanoes nearby. Using the collected data from the seismometers, the team was then able to create three-dimensional images of the areas underneath the volcanoes.

The tomographic picture clearly indicated that Lusi and the Arjuno-Welirang volcanoes are linked to each other, and that the Lusi-eruption in 2006 was a result of a prior inflow of magma and hydrothermal fluids sourcing from the Arjuno-Welirang complex.

This connection was also previously shown by samples of gas taken from Lusi as part of the activities of the Lusi-Lab-team. The gas samples had a mantellic geochemical signature that is similar to that of the fumaroles of the neighboring volcanic complex.

The mud- and the twin stratovolcanoes, are connected in an underground system. The Lusi eruption located in a sedimentary basin is influenced by the powerful Arjuno-Welirang volcano complex, where a magma chamber and related pressures are present.

The constant pressure from the Arjuno-Welirang complex caused the magma to migrate into Lusi’s sedimentary basin baking the organic-rich sediments, and preparing the setting for the eruption of mud, gas, water and rocks. This resulted in the mud eruption, Mazzini explains:

– The boiling mud is a mixture of fine- and coarse-grained sediments (including clasts up to 20 cm in size). The lithologies composing the erupted solid fraction are a mixture of the various formations that are pierced, brecciated and transported to the surface through the (at least) 6 km deep Lusi conduit.

– In addition to sediments, water and gas are also present. The water, similarly to the sediments, originates from the various formations at different depth in addition to hydrothermal deep water forming a complex cocktail at the surface. The same concept goes for gas that also has a strong component of deep and hot mantellic gas, supporting the tomography findings we had with help of the seismometers.

The heating generated by the igneous intrusion and the migration of the hydrothermal fluids from the Arjuno-Welirang complex into the organic-rich sediments of the Lusi basin, generated large overpressure and fluids (gas and water) produced during the thermometamorphism of the organics present in the regional source rock.

This mechanism is still feeding the Lusi activity today.

– By allowing magma to flow into Lusi’s sedimentary basin, the fault system could be an avenue for moving the entire volcanic system northward, said Stephen Miller, Professor of Geodynamics at the University of Neuchâtel, Switzerland in a press release from the American Geophysical Union (AGU). Miller is not connected to the study.

Mazzini and other scientists are unsure how much longer Lusi will continue to erupt. While mud volcanoes are fairly common on Java, Lusi is a hybrid between a mud volcano and a hydrothermal vent, and its connection to the nearby volcano will keep sediments cooking for years to come.

Adriano Mazzini, Researcher and Leader of the Lusi-Lab

What Caused the Eruption of the World's Largest Mud Volcano? Live Science. 31.10.2017