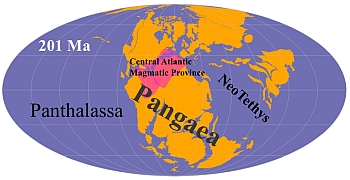 Supercontinent of Pangea with the The Central Atlantic Magmatic Province in red. Illustration: Research team/CEED

The international research team, including four researchers from CEED (Heimdal, Svensen, Jones  Callegaro), modelled that the gas generation from contact metamorphism of carbonates and organic-rich rocks in sedimentary basins in northern Brazil could have included as much as 88,000 gigatonnes CO2.

The team also performed radiometric dating that confirmed that the sills were emplaced synchronously with the end-Triassic extinction (ETE).

The End-Triassic extinction occurred at the end of the Triassic Period (252 million to 201 million years ago). It is believed that 76 percent of all marine and terrestrial species and about 20 percent of all taxonomic families saw their demise in the mass extinctions event.

The new study was recently published in the Nature journal Scientific Reports, January 2018.