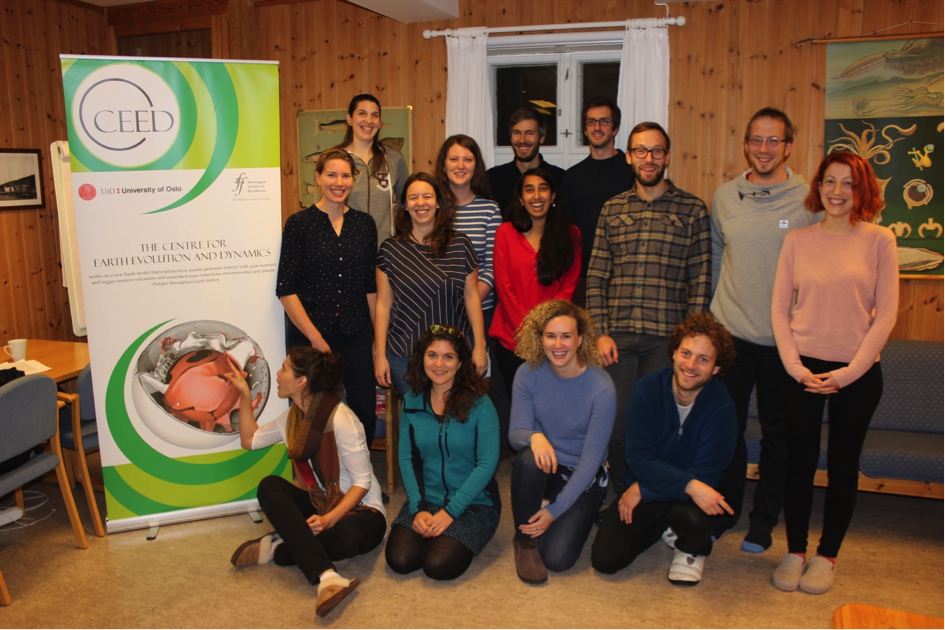 The 14 participants of the #YoungCEED18 workshop. The workshop was organized by Fabio Crameri, Valentina Magni, Mathew Domeier and Grace Shephard, and was generously financed by CEED.

Generally speaking, subduction is the process in which one of Earth’s tectonic plates, typically an oceanic plate, descends under another into the mantle. Subduction is an intrinsic component of plate tectonics and subduction zones are well-known as sites associated with earthquake generation and volcanic eruptions. While present-day subduction dynamics can be studied by multiple imaging and sampling methods, the characteristics of how these zones actually started back in time – including how, why and where subduction starts – are elusive. Indeed, it is estimated that only a third of present-day subduction zones formed in the last 65 Million years.

What local and global conditions are required to start a new subduction zone? Are any subduction zones truly “spontaneous” in nature, or do they all require some kind of forcing? What can boninites, metamorphic soles, ophiolites, and fore-arc basalts tell us? These are just some of the questions and discussion points that arose during the week.

To better tackle these questions the participants of #YoungCEED18 spent 7 days and nights together in the historic building, “Tollboden”, in Drøbak about 1 hour south of Oslo. The group spent the week both working within and across their individual specialties, investigating the similarities and differences among several subduction initiation events of the last 100 Million years. The daily schedule included presentations, report writing, literature reviews, software courses, the analysis of digital plate models, and plenty of group discussions. A significant outcome of the workshop is a working version of a large subduction initiation database that will eventually be delivered to the wider geoscience community. Having been left to their own devices for a week, the team presented their preliminary findings to the CEED Director Carmen Gaina and some of the CEED team leaders over dinner.

Not only was the workshop a unique opportunity for Early Career Researchers to put aside their regular research tasks and to explore ideas amongst themselves, it was also a fantastic opportunity for building new collaborations. Impressively, the participants covered 13 nationalities, and the hosts were very keen to share some Norwegian culinary delights (at least one member stopped by the supermarket to take home some brunost [brown cheese] and Kvikk Lunsj)! Finding a break in the mid-November rainy weather, the program also included a visit to the Oscarsborg Fortress and the Drøbak aquarium.