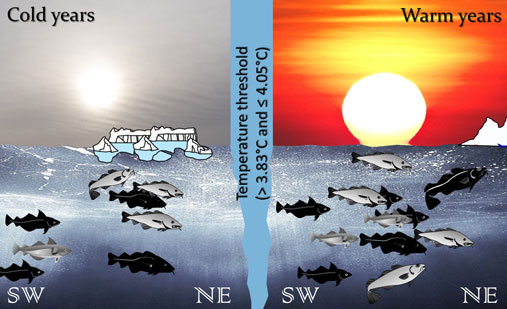 Figure 1. Over a sea temperature threshold of 4°C the cod and haddock that were otherwise co-variating start a competition relationship, the cod negatively affecting the haddock changing the shape of the interaction of these two species even if the two stocks are more abundant.

Climate change has profound ecological effects. High latitude regions, such as Arctic and Boreal seas, are highly sensitive to climate change (Frainier et al. 2017). Since the early 90s, global temperatures have been steadily increasing and affecting the distribution of Arcto-boreal species and their life cycle. In the Barents Sea, northeast Arctic haddock has a distribution and life cycle very similar to its bigger cousin the northeast Arctic cod. Recent years have shown an increase of both cod and haddock population in the Barents Sea linked to a sea temperature increase.

Could the haddock and the cod interact?

The interactions among species can shift repeatedly because of changes in the environment. While the environment is changing all the time (e.g. at a seasonal or daily basis) the recent climate warming is creating a direction to this change. The increase of the global temperatures have been a major motivation for investigating a plethora of effects on biological systems, e.g., distribution, behaviour, phenology etc…

Atlantic cod and haddock are two gadoid species of high economic importance, closely related, that co-occur in many regions in the North Atlantic such as the Barents Sea (Figure 2), the North Sea and the Georges bank in Canada’s waters. Cod and haddock have an overlapping diet at the larval stage, and are potential competitors at this stage, but are more segregated diet when adults. At the adult stage, Cod have a more fish-oriented diet than haddock that feed more on benthic prey. Adult cod then prey on haddock (see post).

To explore the interaction between these two species in the Barents Sea, we used a state-space Gompertz model on a combined acoustic and trawl survey data set covering 33 years. In this study, published in Global Change Biology (Durant et al. 2020), we showed that the interaction is non-linear. Over a sea temperature of 4 °C the cod and haddock populations, that were otherwise co-varying, start a competition relationship, the cod negatively affecting the haddock changing the shape of the interaction of these two species (Figure 3).

Why temperature affects the haddock-cod interaction?

In our study (Durant et al. 2020), we showed a change in these species interaction with increase of temperature. The cod effect on haddock that was positive (indicating a covariation) becomes negative (indicating a competition or predation) with the increase of temperature, a trend of recent years. This change in interaction was also visible in the cod diet (Figure 4). Indeed, recent analyses of Barents Sea cod stomach contents showed a significant increase of the proportion of haddock (mainly smaller ones) in their diet since 1984 (Holt et al. 2019). This change in diet may be linked to the distribution change of the two species with climate warming and the increase of the mean size of the NEA cod in recent years, the haddock being present in a larger number in the diet of larger cod than in smaller cod one (see post).