Nanotechnology and materials science requires very sophisticated equipment. In MiNa we have state-of-the-art cleanroom facilities for advanced material research. The laboratory includes facilities and a complete silicon processing line for the University of Oslo (SMN) and SINTEF.

These facilities are available for researchers, students and external companies. A brief introduction to our infrastructure will be presented here. 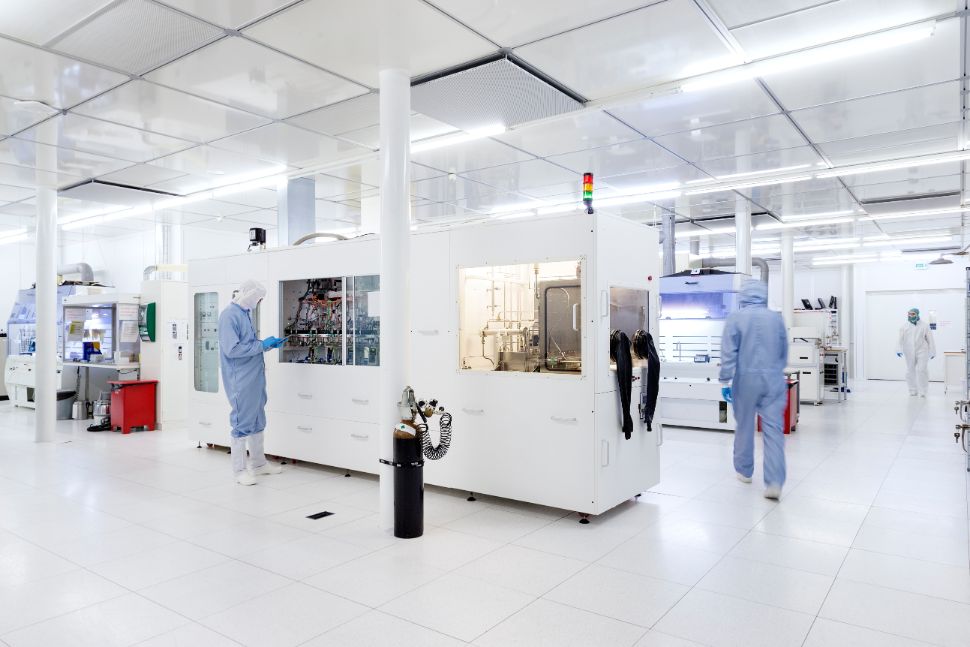 Advanced tools for synthesis, processing and characterization are available at MiNa.

This technique involves excitation of the electrons of a sample surface by application of a laser light. Often these excited electrons will relax and fall into the conduction band before emitting a photon and settling in the valence band. This roundtrip may involve many steps and the emission of several photons, giving valuable information about the electron structure of the material.

For electrical characterization we have equipments for measuring various electrical parameters such as; voltage, current, capacitance and conductance. This gives the possibility of performing current-voltage (IV), capacitance-voltage (CV) and conductance-voltage (GV) measurements. In combination with the possibility of varying the temperature and frequency, characterization methods such as; deep level transient spectroscopy (DLTS), temperature stimulated current (TSC), impedance spectroscopy (IS) and admittance spectroscopy can be performed.

In the electrical characterization lab, we have five setups all with slightly different properties related to the sample holders, frequency range and cooling systems. Three of the setups use liquid nitrogen (LN2, which can reach 77 K) as the cooling source and operate at atmospheric pressure. The two last setups have sample chambers that can be pumped to low vacuum, and use a helium gas cryo pump for cooling. If proper vacuum conditions exist, these setups can measure down to 10 K. All but one of these five setups have an upper temperature limit of about 350 K, while one of the setups based on LN2 can be operated up to 700 K. As all of the sample holders have an internal heating element, the temperature can be stabilized at a desired temperature during measurements. Of the mentioned setups, the sample holders for low temperature measurements have a sample size limitation of ~1x1 cm2. Whereas samples of ~2x2 cm2 can be handled in the sample holder which uses LN2 as the cooling source.

In the cleanroom, there are dedicated setups for performing various electrical characterizations. We have a quasi steady-state photo conductance (QSSPC) for lifetime measurement and a four-point probe for resistance measurement of bulk and thin films, both operating at room temperature. In addition, we have a Hall-setup with a vacuum and cooling system similar to the aforementioned low temperature systems which have a temperature range of 10-350 K. There is also a setup capable of performing IS at high temperature in different atmosphere.

Secondary ion mass spectrometry (SIMS) is a technique used in materials science and surface science to analyze dopant elements and impurities in solids and thin films by sputtering the surface of the specimen with a focused primary ion beam and collecting and analyzing ejected secondary ions. These secondary ions are measured with a mass spectrometer to determine the elemental, isotopic, or molecular content/concentration. SIMS is one of the most sensitive surface analysis technique, being able to detect elements present in the parts per billion range.
Measurement modes:

You can apply for access and book instruments here