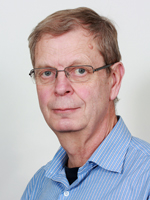 In recent years, it has become evident that antimicrobial peptides (AMPs) are produced by nearly all organisms: prokaryotes, plants, and a variety of animals, both invertebrates and vertebrates, including humans. These peptides clearly represent an important defense against microorganisms.  There has been much interest in these peptides due to the potential of developing them into useful antimicrobial additives and drugs, and due to their general biological and biochemical importance. By studying these peptides, insight has been gained into host defense systems, membrane-protein interactions, and protein modification and secretion.

Our group – The Peptide Group – has largely studied AMPs produced by lactic acid bacteria (LAB), in part because theseAMPs are very potent and they are produced by "food grade" bacteria and might consequently be utilized as relatively safe agents for preventing growth of pathogenic/undesirable microorganisms. Our research is presently focused on elucidating:

Moreover, using insight gained from these studies, research is also focused on the construction of new and more optimal peptide variants.

We have identified, isolated and or characterized – (3D) structurally, functionally (i.e. the mode-of-action) and genetically – more than 20 different AMPs.  By use of CD- and NMR-spectroscopy, X-ray crystallography, and site-directed in vitro mutagenesis, the 3D structure and mode-of-action of these peptides and their cognate immunity proteins (proteins that AMP-producing bacteria also produce in order to protect them self from being killed by their own AMP) have been studied. In order to identify genes encoding proteins involved in the mode-of-action of AMPs, we have recently successfully applied sequencing of the whole genomes of AMP-sensitive bacteria and of corresponding bacteria that have become AMP-resistant due to long-time AMP-exposure.