OpenMP is a well-established standard for programming shared-memory parallel computers. Since 2013, the latest version of OpenMP (4.0 or later) has included the possiblity of utilizing heterogeneous computing systems that are made up of multicore CPUs and accelerators (such as GPUs and many-integratred-core coprocessors). We want to examine how typical numerical algorithms should be re-implemented using OpenMP-4, with the aim of using heterogeneous computing systems. 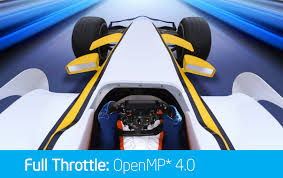