Tittel: Giving New Life to Materials for Energy, the Environment and Medicine. 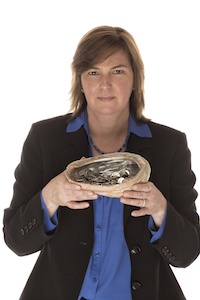 Organisms have been making exquisite inorganic materials for over 500 million years. Although these materials have many desired physical properties such as strength, regularity, and environmental benign processing, the types of materials that organisms have evolved to work with are limited. However, there are many properties of living systems that could be potentially harnessed by researchers to make advanced technologies that are smarter, more adaptable, and that are synthesized to be compatible with the environment. One approach to designing future technologies which have some of the properties that living organisms use so well, is to evolve organisms to work with a more diverse set of building blocks. The goal is to have a DNA sequence that codes for the synthesis and assembly of any inorganic material or device. We have been successful in using evolutionarily selected peptides to control physical properties of nanocrystals and subsequently use molecular recognition and self-assembly to design biological hybrid multidimensional materials. These materials could be designed to address many scientific and technological problems in electronics, military, medicine, and energy applications. Currently we are using this technology to design new methods for building batteries, fuel cells, solar cells, carbon sequestration and storage, enhanced oil recovery, catalysis, and medical diagnostics and imaging. This talk will address conditions under which organisms first evolved to make materials and scientific approaches to move beyond naturally evolved materials to genetically imprint advanced technologies with examples in lithium ion batteries, lithium-air batteries, dye-sensitized solar cells, and ovarian cancer imaging.

Angela Belcher is a biological and materials engineer with expertise in the fields of biomaterials, biomolecular materials, organic-inorganic interfaces and solid-state chemistry and devices. Her primary research focus is evolving new materials for energy, electronics, the environment, and medicine. She received her B.S. in Creative Studies with an emphasis in biology from The University of California, Santa Barbara. She earned a Ph.D. in inorganic chemistry at UCSB in 1997. Following her postdoctoral research in electrical engineering at UCSB, she joined the faculty at The University of Texas at Austin in the Department of Chemistry in 1999. She joined the faculty at MIT in 2002 and now holds the James Mason Crafts Professor of Biological Engineering and Materials Engineering. She is faculty in the Department of Biological Engineering, Materials Science and Engineering and the Koch Institute of Integrative Cancer Research. She teaches undergraduate subjects in material sciences and engineering and biological engineering. In 2002, she founded the company Cambrios Technologies, Inc., and in 2007 she founded Siluria Technologies, Inc. Some recent awards include the 2013 $500,000 Lemelson-MIT Prize for her Inventions, 2010 Eni Prize for Renewable and Non-conventional Energy, in 2009 Rolling Stone Magazine listed her as one of the top 100 people changing the country. In 2007, Time Magazine named her a “Hero”- for her research related to Climate Change. In 2004, she received the Four Star General Recognition Award (US Army) for significant contribution to army transformation. In 2000, she was awarded the Presidential Early Career Award in Science and Engineering (PECASE). She was named Research Leader of the Year by Scientific American, and is a MacArthur Fellow, a Packard Fellow, a NAI Fellow, and an Alfred P. Sloan Fellow.