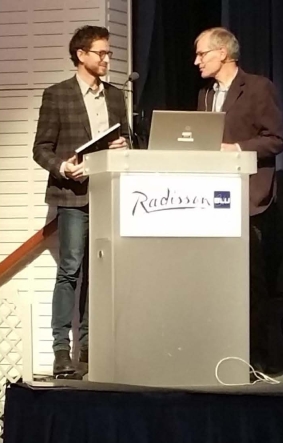 Geologist and senior research fellow Henrik Svensen at the Centre for Earth Evaluation and Dynamics (CEED) and the Department of Geosciences, University of Oslo, has been awarded the Toffen Prize for his outstanding contribution to the popularization of geology.

Svensen is author of several books "Enden er nær. Om naturkatastrofer og samfunn" (2006) and "Bergtatt" (2011), which has been named 'the mountain book of the year 2012'. He is also editor of the book "Isfritt. Populærvitenskap som angår deg" (2014).

About the Toffen Price

The Toffen prize was established by the Norwegian Geological Society and named after professor Christoffer Oftedahl ("Toffen", 1917-1982) one of the leading geologist in Norway and a contributor for outreach about geology to students and the public.

The award will serve to pay homage to a geologist who, through lectures, articles or other sectors have contributed significantly to the popularization of scientific research and art in general.