The DPX 300 instrument was produced in 1993 and was installed in our laboratories in February 1994. 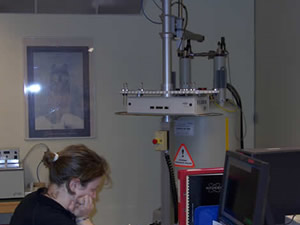 The instrument is controlled by:

The DPX 300 was (as DPX 200 and DRX 500) originally installed with a SGI computer running XwinNmr version 0.9 and has gone through almost all XwinNmr upgrades (1.0, 1.1, 1.3 (actually the most reliable one!!) 2.0, 2.6, 3.0 and finally version 3.5). Sometime during all these software upgrades the SGI computer was replaced with a Dell PCs running Windows 2000, now XP SP3. The ease of operation resulting from the transition from the Irix operating system to the Windows operating system is one of the best things that ever have happend to the NMR staff.

The instrument is configured with two complete channels and deuterium lock. The instrument is equipped with home built aluminum plates at the top and bottom of the magnet, in these plates warm water is circulating to avoid cool down of the O-rings - when we are doing low temperature experiments. The home built system does also include a flow system for dry air to be blown along the shim system inside the magnet - to avoid high and low temperatures in the shim system when performing experiments at both high and low temperatures.

Bruker 10 mm BBO broad band observe probe, observation of 1H and almost all other nuclei. This probe is ideally suited for observing 14N in living plants.