Else-Ragnhild Neumann Award for Women in Geosciences is awarded for the 3rd time, and this year it goes to Dr Ágnes Király, CEED, UiO. The award is given to a PhD or Postdoctoral Fellow who has given a significant contribution to research in geosciences. 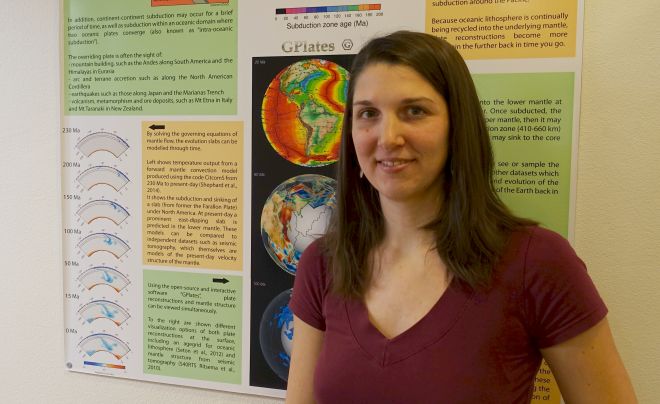 Ágnes Király is a researcher at the Centre for Earth Evolution and Dynamics (CEED) and Dept of Geosciences, University of Oslo. Here in front of a poster from CEED about geodynamics and plate tectonics/subduction, which are her research interests. Photo: Gunn Kristin Tjoflot/UiO

This award was established in 2018, and has since then been awarded a woman which has contributed with a significant impact to the subject area geosciences in her PhD and/or postdoc research. The prize winner receives a diploma, honour and the prize money which is 50 000 NOK.

The prize winner of 2020: Ágnes Király

This year the prize is awarded Ágnes Király, a researcher at CEED, working in the subject field of mantle geodynamics, and specially subduction.

The prize committee conclude that: "(This year*s prize winner) has outstanding results already obtained and on an important topic, with important implications in Geodynamics. She has a very good publication record and has given several invited lectures. The candidate is a very promising young scientist."

Király is a proud recipient of the award, and she states the importance of receiving the Else Ragnhild Neumann Award for 2020 as follows:​

– It has already meant a lot to me to be nominated for this prize (by Prof. Clinton P. Conrad), and it was a great surprise that I got awarded. It feels very special and motivating to receive this prize, especially as it has been inspired by someone (Else-Ragnhild) who I personally know from CEED, and admire for her achievements, and her dedication towards the Geosciences.

Ágnes Király is originally from Budapest, Hungary, and as she says herself, she grew up with research and exploring the nature. She gained early an interest in geophysics, as she grew up in an academic family, and she has an MSc degree in geophysics and completed in 2017 a doctorate in Earth Sciences at the University of Roma Tre in Italy.

After several stays at various research institutes in different countries, she has since 2017 been associated with Centre for Earth Evolution and Dynamics, University of Oslo. First as a postdoctoral fellow and now as a researcher. Her husband also lives in Oslo and works at UiO – they are now both learning Norwegian in their spare time.

Király's research within geodynamics includes numerical methods as well as analogue models, watch this YouTube video for a summary: A Slice of CEED summary – Analogue modelling.

You can read more about Agi’s publications at Google Scholar.

Recently, on 16 December, Ágnes was informed that she has received a 'Young Researcher Talent (YFF)' grant from the Research Council of Norway for her research project entitled: "ANIMA – ANIsotropic viscosity in MAntle dynamics".

Congratulations to this year`s prize winner!

Summary about the prize

Neumann has worked at the University of Oslo and has published  many articles about volcanism and links to processes in the mantle. She has studied the Oslo-region, the Canary Islands and other volcanic islands, the large area of volcanic rocks called the Siberian Traps in Siberia, Russia and other areas that have experienced significant magmatism.