Media response to the article "Continental crust beneath Southeast Iceland"

At Öræfajökull on the saga island Iceland, it may be a bit of an ancient continent. The area is well known because it stands out from the rest of Icelands geological characteristics. Researchers from the Centre for Earth Development and Dynamics - CEED - have in their article in PNAS launched a theory about that the area remains of an ancient continent perhaps a bit of Greenland. The article has got attention in the media. 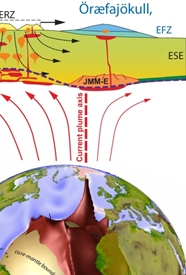 The article about the theory of a sunken continent under the southeast coast of Iceland is published in the American research journal; Proceedings of the National Academy of Sciences of the United States of America (PNAS) on 30 March 2015.

Other In media coverage: