Morgan Jones is the winner of the EGU2015 Photo Competition

Morgan Jones from CEED is the winner of the EGU2015 Photo Competition arranged by the European Geosciences Union, General Assembly 2015. Jones won with a picture from the Holuhraun volcano eruption, Iceland 2014. The picture is taken with Sverre Planke from Volcanic Basin Petroleum Research AS (VBPR) and CEED. 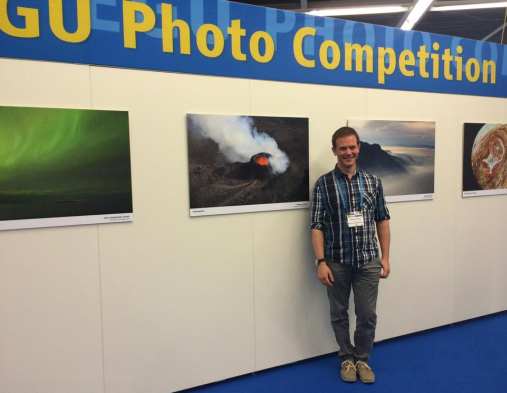 Morgan next to the winning areal photo of the Holuhraun volcanic eruption at Iceland in 2014. Photo: Morgan Jones and Sverre Planke, CEED

The EGU General Assembly is a huge event for the geosciences research society in Europe and rest of the world.

This time participated according to the EGU 2015`s webpages as much as 11,837 scientists from 108 countries in Vienna at EGU General Assembly this year. From Norway came 239 researchers to this event 12-17. April 2015.

Photo contest and picture of the Holuhraun volcano, Iceland

At the programme with several talks and posters presentation, and events there was also arranged a photo exhibition and contest - EGU2015 Photo Competition.

Morgan Jones, researcher at CEED participated in this contest with a photo of the Holuhraun volcanic eruption at Iceland in 2014. The photo from Jones and Sverre with title "Heiturpottur" was among three winners of the photo contest. 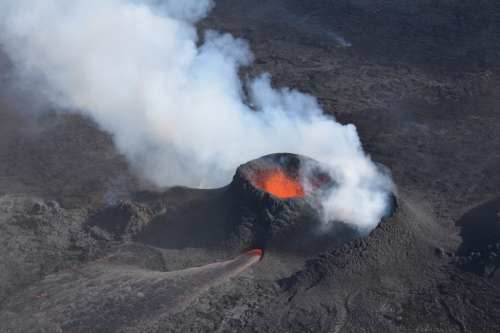 The story behind the picture

The eruption of Holuhraun/Bárðarbunga in Iceland began at the end of August 2014 and continued for 6 months. This was the largest eruption in Europe in the last 200 years, forming more than 1.5 km3 of lava. It began as a fissure eruption with multiple vents, and gradually evolved to have a single central vent that morphed into a lava lake as the eruption progressed.

Planke and Jones managed to visit the eruption site to collect water and lava samples 12 days into the eruption, when multiple vents were still active. The most southerly vent had built up a small scoria cone about 20 m wide, within a larger, older cinder cone. The visual effect gave the impression of one of Iceland’s famous geothermal bathing pools, which is why we called this photo “Heiturpottur” (“Hot Tub” in Icelandic). This feature has since been buried by subsequent lavas during the course of the eruption.

The field work was done by VBPR and CEED (see GEO 06/2014). The photo can be freely used as long as VBPR (www.vbpr.no) is acknowledged. Photo byline: Morgan Jones and Sverre Planke