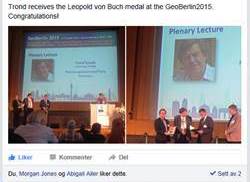 Professor Trond Torsvik receives the 2015 Leopold von Buch medal, given by the Council of the German Geological Society. The award ceremony will be at their Annual Convention in Berlin 4-7 October (GeoBerlin 2015), where Trond also will give a plenary lecture.

The prize is in recognition and appreciation of outstanding professional  contributions to understanding geodynamics.