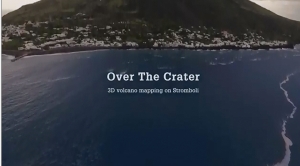 Screen dump taken from the start of the film.

Scientists at CEED, University of Oslo the University of Aberdeen, have teamed up to produce the first 3D thermal model of Stromboli volcano. Using state of the art drone technology they document the research in the short film 'Over the Crater', by using the regular eruptions of Stromboli as a real life laboratory.

With the recent larger Paroxysm eruption at Stromboli on the 3rd of July 2019, the need to develop the best and safest volcano monitoring could not be more relevant, and 'Over the Crater' looks forward to how this area of research is going forward, with some spectacular footage from Stromboli.

Stromboli Volcano - Over The Crater