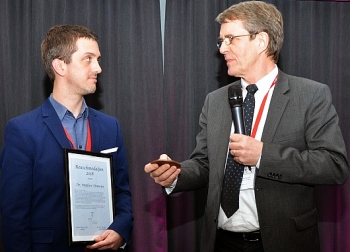 The Reusch Medal is given by the Norwegian Geological Society (NGF) and awarded to a young researcher for outstanding scientific contributions at the highest international level.

The scientific contribution should have relevance to Norwegian geology and Mat was awarded the medal for the paper Domeier (2016). A Plate tectonic scenario for the Iapetus and Rheic Oceans, Gondwana Research, Vol 36, p. 275-295

The work represents the first real plate tectonic model for the Caledonian Orogeny that include the entire lithospheric plate system – i.e. both the continental and (synthetic) oceanic components of plates and their boundaries – which are required to kinematically evolve seamlessly in time according to plate tectonic rules. This extraordinary work is already well cited in the literature and it is extremely relevant to the understanding of the Norwegian geological history.

Congratulations to Mat from CEED!