CEED participates in the SENECA expedition to Antarctica's Dry Valleys

Leaving today, 6th of December, Adriano Mazzini a researcher from GEO/CEED/UIO will be part of the 35th Italian expedition to the Dry Valleys of Antartica. Permafrost in the Dry Valleys store huge amounts of greenhouse gasses. 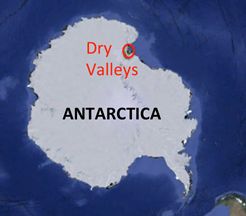 The Dry Valleys (Wikipedia) are a row of largely snow-free valleys in Antarctica.

Studies conducted on permafrost in the Arctic and Antarctic regions have shown how these areas store almost twice the carbon currently present in the atmosphere. The permafrost thaw will potentially cause an increase of the greenhouse gases concentrations in atmosphere, raising the global warming effect.

The results will be used to derive a first total emission estimate, for methane and carbon dioxide, at Southern Polar Hemisphere.

The two years project which involves 4 Italian universities and research institutes: including CEED here in Norway and those based in New Zealand. The project has four major tasks:

(1) to determine the soil gas content and origin,
(2) the CO2 and CH4 degassing output,
(3) to conduct geoelectric exploration and petrographic characterization of the soils, and
(4) to estimate the seasonal trend of CO2 soil concentration.

The international teams will survey the Dry Valleys (Taylor and Wright valleys) in Antarctica in December-January 2019-2020 and 2020-2021.

Read more about the expedition in this article: