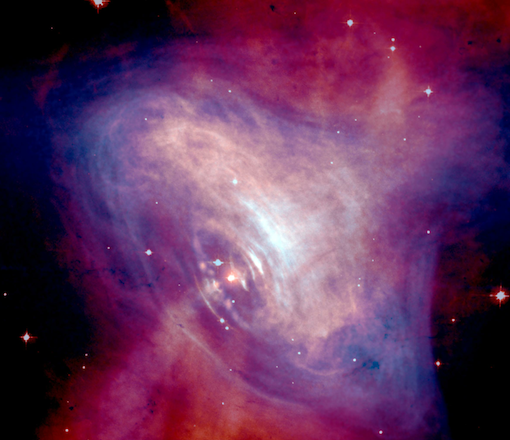 Combined X-Ray and Optical Images of the Crab Nebula. From the Hubble telescope, NASA

Nuclear physics is now pushing at new frontiers of isospin and temperature based on an increasing understanding of nuclear structure and reactions earned over the last decades. In spite of this progress, there are many questions not yet answered. The research group at the Oslo Cyclotron Laboratory (OCL) has provided break-through findings of the behavior of the nucleus in the transition region from quantum order to chaos. For example, our group was the first to experimentally verify the gradually melting of the nucleus as it heats up. Also, the study of the high-energy electromagnetic radiation has provided new information on the resonance modes of the nucleus. 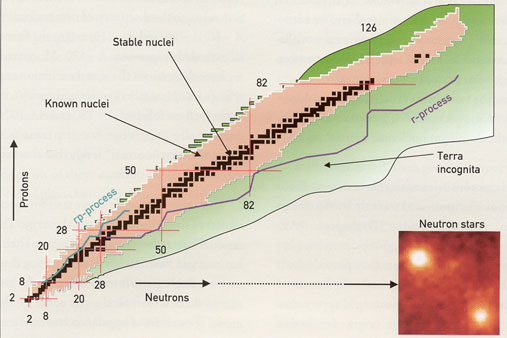 The nuclear chart with magic proton and neutron numbers.

A major motivation for studying the atomic nucleus is to gain a fundamental understanding of our world, including its origin and future, as well as its current state. Nuclear physics can explain how stars continually work to release virtually all of the useful energy in the world, while at the same time assembling the various elements. Thus today there is a strong collaboration between the fields of nuclear physics and astrophysics.

There are many potential applications of nuclear physics, e.g. in energy production, medical diagnosis and treatments. There are still several challenges, which make nuclear physics a very interesting and active field of future research.

Experimental nuclear physicists use accelerators to study various aspects of the nucleus. The Oslo group uses their home facility OCL in several projects. However, we are also part of a large international network and perform many experiments abroad.

The PHOENIX Collaboration aims at delivering the total gamma-strength function of key isotopes. Photonuclear data from inverse Compton scattering experiments at the synchrotron facility of NewSUBARU in Japan will be combined with Oslo method data from OCL and other labs in order to obtain total gamma-strength functions. In addition, the collaboration includes novel theoretical calculations for the isotopes that are studied. The collaboration will deliver results to the IAEA-CRP F41032 project.

A new method to measure the gamma-strength functions and nuclear level densities for very neutron-rich isotopes has been developed in collaboration with nuclear-physics group at UiO and the National Superconducting Cyclotron Laboratory (NSCL), Michigan State University (MSU), USA. The beta-Oslo method will provide data constraints on neutron-capture reaction rates for processes where heavy elements are made in extreme astrophysical environments.

A memorandum of understanding is signed between UiO and MSU, enabling easy student exchange for master and PhD students. MSU offers a wide range of (credit-giving) courses within nuclear physics and nuclear astrophysics.

The group offers various projects in the field of nuclear physics. The study may have different focuses (theoretical/experimental/instrumental) with respect to the interest and capabilities of the student. Some actual topics are:

Please, do not hesitate to contact us (see group members in right column).