This is a consortium of research groups at The Faculty of Mathematics and Natural Sciences, University of Oslo studying the structures, interactions, and functions of complex sugars attached to proteins and lipids.

The unifying theme of our work is a shared interest in the regulation mechanisms of glycan synthesis in different biological systems, the analysis of the underlying protein-carbohydrate recognition events, and the physiological importance of glycan structures - a theme covering a broad spectrum of topics that we expect will give important functional insights into biological systems. 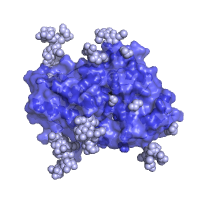 The genomes of several bacteria, unicellular and multicellular eukaryotes (animals/plants) are known. Genes that are translated into proteins are as a whole referred to as an organism's proteome. The human genome, for instance, encodes 40,000 proteins - or more, but the extent of alternative splicing is not yet fully known. By proteomic techniques, the amino acid sequence of proteins can be determined (mass spectrometry or Edman degradation). To determine the biologically active structure of a protein, however, one must take into account that most proteins are modified post-translationally. The dominating modifications are of glycan nature (e.g. a glycome-project identifying all glycoproteins produced in a simple organism, Caenorhabditis elegans (Hirabayashi et al. 2001. Proteomics 1, 295-) revealed that at least 75 % of all proteins in animals are glycosylated). Linear or branched sugar complexes usually extend from asparagines, serines or threonines in the protein core of animal proteins, or from hydroxyprolines in plant cells.

Glycome is a term covering the whole set of glycans produced in a single organism (or tissue) in analogy to genome/proteome and the investigation of glycomes follows as a consequence of the development in the post-genome era. It has been known for decades that cell surfaces are coated with glycans, but only in recent years has it become clear that glycans control or encode the biological and immunological activity and/or specificity of many proteins and play critical roles in a wide range of biological phenomena.

Glycomics is hence an important and integrated part of functional genomics (FUGE), and a major cornerstone in systems biology.