New publication! Temporal processing in the visual cortex of the awake and anesthetized rat

This paper explores the effects of anesthesia on neural processing in the rat visual cortex, by comparing temporal response properties of neurons followed from wakefulness to anesthesia. 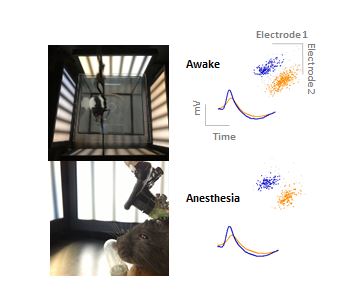 As investigations of neural information processing have moved from anesthetized to alert animals, a question emerges on how we can compare data and interpret results from recordings from anesthetized animals. Previous efforts to investigate the impact of anesthesia on visual processing have frequently compared population responses from separate animals or experiments. The large diversity of neurons in the cortex demands comparisons within units and ensembles. Here, we followed units across states and found unpredictable and profound differences in the temporal dynamics of single units and ensembles between the anesthetized and awake states. To exemplify the importance of such a comparison, we demonstrate how such data can be used as a basis to test and develop models on network activity.

Title: Temporal processing in the visual cortex of the awake and anesthetized rat
Authors: Ida Aasebø, Mikkel Lepperød, Maria Stavrinou, Sandra Nøkkevangen, Gaute Einevoll, Torkel Hafting, and Marianne Fyhn
Journal: eNeuro 24 July 2017, 4 (4) ENEURO.0059-17.2017; DOI: https://doi.org/10.1523/ENEURO.0059-17.2017
Abstract:  The activity pattern and temporal dynamics within and between neuron ensembles are essential features of information processing and believed to be profoundly affected by anesthesia. Much of our general understanding of sensory information processing, including computational models aimed at mathematically simulating sensory information processing, rely on parameters derived from recordings conducted on animals under anesthesia. Due to the high variety of neuronal subtypes in the brain, population-based estimates of the impact of anesthesia may conceal unit- or ensemble-specific effects of the transition between states. Using chronically implanted tetrodes into primary visual cortex (V1) of rats, we conducted extracellular recordings of single units and followed the same cell ensembles in the awake and anesthetized states. We found that the transition from wakefulness to anesthesia involves unpredictable changes in temporal response characteristics. The latency of single-unit responses to visual stimulation was delayed in anesthesia, with large individual variations between units. Pair-wise correlations between units increased under anesthesia, indicating more synchronized activity. Further, the units within an ensemble show reproducible temporal activity patterns in response to visual stimuli that is changed between states, suggesting state-dependent sequences of activity. The current dataset, with recordings from the same neural ensembles across states, is well suited for validating and testing computational network models. This can lead to testable predictions, bring a deeper understanding of the experimental findings and improve models of neural information processing. Here, we exemplify such a workflow using a Brunel network model.