We have for some 20 years worked on comparative respiratory and circulatory physiology, and comparative neurobiology 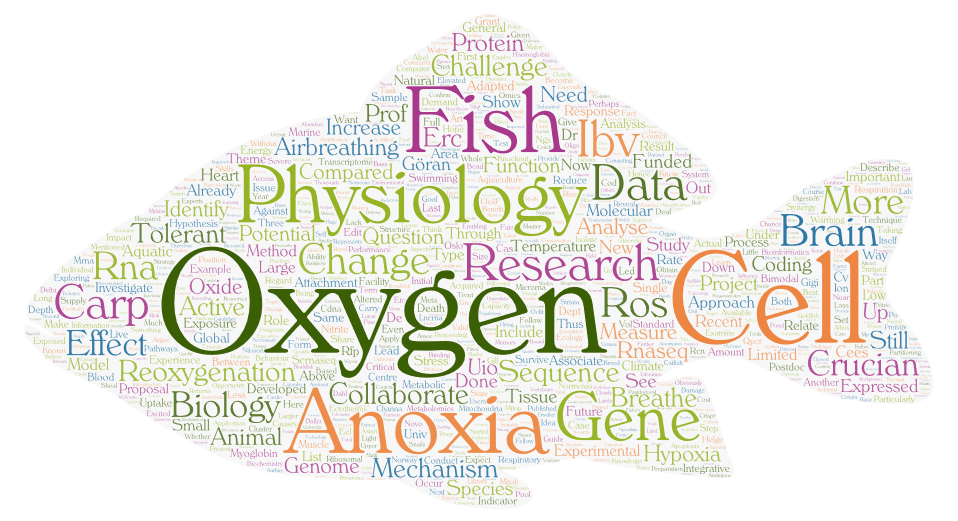 Here are some areas presently in focus:

Mechanisms of hypoxia and anoxia tolerance

Adaptations to variable oxygen levels in the brain, heart, and respiratory organs are studied in various vertebrates. Of special interest are those animals that show an extraordinary high tolerance to anoxia. These include the crucian carp (Carassius carassius) and freshwater turtles of the genera Trachemys and Chrysemys. Obviously, the existence of anoxia-tolerant vertebrates shows that evolution solved the problem of anoxic survival millions of years ago - something that medical science has attempted to do with very limited success during the last decades.

The group has shown how a vertebrate heart (crucian carp) maintains cardiac output without any oxygen, revealed the capacity of fish to remodel their gills in response to ambient oxygen levels, characterized the molecular mechanisms of ethanol production in a vertebrate, and demonstrated that animals can use GABA-mediated endogenous anaesthesia to reduce brain energy use.

They have now started to focus on the molecular mechanisms involved in the physiological adaptations to anoxia, gaining insights from metabolomics, transcriptomics, ribosomal footprint profiling, and genomics.

High an acid in a warmer future: effects of elevated temperature and carbon dioxide on physiology and behaviour of marine animals

After having studied the ability of coral reef fish to cope with low oxygen levels, the focus is now turned to effects of elevated temperatures and how CO2 affects neural function and the aerobic scope (the difference between resting and maximal rate of oxygen uptake) of fish. Average sea-surface temperature and the amount of CO2 dissolved in the ocean are rising. We have found that many coral reef fishes are living close to their thermal optimum, and even moderate increases in temperature (2 - 4°C) lead to reduced respiratory performance. Another worry is that, even at maintained water temperatures, predicted future rises in ocean CO2 levels alter sensory responses and behaviour of marine fishes. Changes include increased boldness and activity, loss of behavioural lateralization, altered auditory preferences and impaired olfactory function. We have found that these abnormalities appear related to the function of the GABA-A receptor, since they can be reversed by treatment with a GABA-A antagonist. GABA-A is a Cl- / bicarbonate channel and a major neurotransmitter receptor. The ubiquity and conserved function of GABA-A receptors predict that rising CO2 levels could cause behavioural impairment in a wide range of marine animals. Recent examples of apparent high-CO2 induced alterations in GABA-controlled functions include both fish and molluscs.

The brain and heart of fish during stress and social interactions

Several years ago the group could show that brain monoaminergic neurotransmitters, particularly serotonin and dopamine, are intimately connected to stress reactions in fish, including socially induced stress. Our focus is now on the role of neurogenesis (formation of new brain cells) in stress reactions in fish and how neurogenesis is controlled. These studies, which are largely carried out in collaboration with the Norwegian University of Life Sciences and Uppsala University, have shown that stress reduces neurogenesis in the brain of salmonid fish, and that cortisol appears to play a key modulatory role in fish neurogenesis. We have now also found that stress and cortisol have profound effects on the heart of fishes, effects that may reflect the evolutionary background of some human heart disease.

The methods used by the group, often in collaboration with others, range from biochemical and molecular procedures, and physicochemical analyses of proteins, to physiological studies using respirometry, in vivo and in vitro cardiovascular measurements, microdialysis, electrophysiology, and immunohistochemistry. Recently the group has ventured into 'omics', i.e. transcriptomics, proteomics, phosphorylomics, metabolomics, translatomics, and genomcis.

We collaborate extensively with ecologists to broaden the scope of the research from molecule to ecosystems. More than half of all projects are carried out through international collaborations, primarily with groups in USA, Canada, Australia, UK, and Denmark.