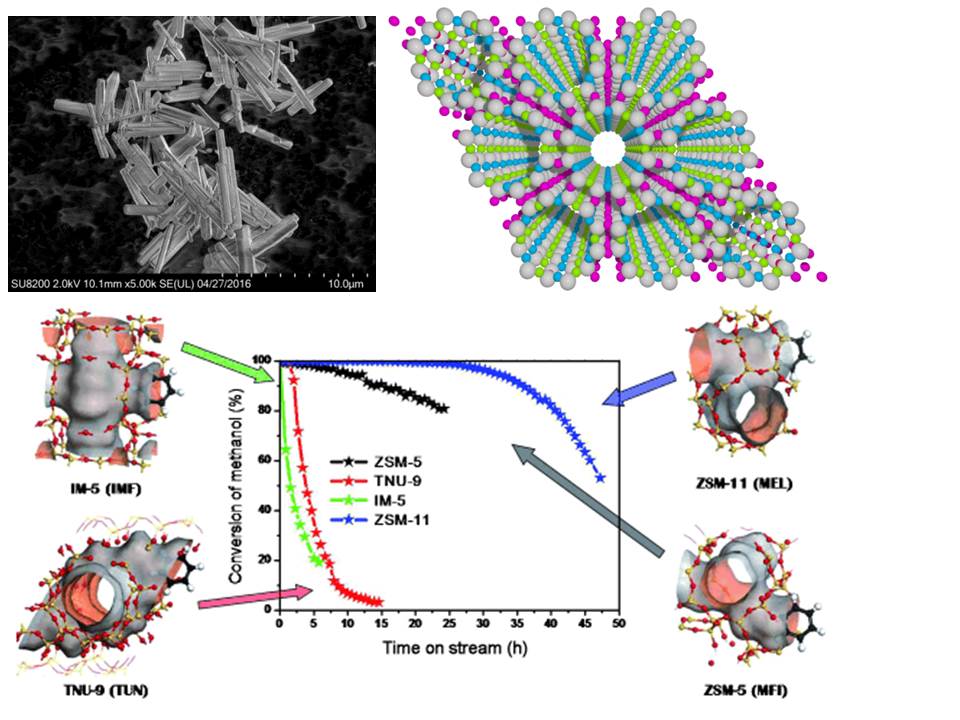 Nanoporous zeolitic materials are widely employed for industrial conversion of hydrocarbon sources into consumer products, for gas separation, and for environmental remediation. We investigate a number of zeolite- and zeotype-mediated chemical processes that will have a significant impact on the development of sustainable chemical technologies. These processes enable efficient valorisation of C1-C2 feedstocks, including those from renewable sources, into valuable commodity chemicals. Many projects in the group are dedicated to Methanol-to-Olefins (MTO) reactions occurring in zeolites via a dual cycle HydroCarbon Pool (HCP) mechanism. This process converts a C1 platform molecule – methanol – into a range of heavier molecules that are used to produce plastics and base chemicals. Other processes investigated in our group include methane partial oxidation for more sustainable production of methanol (e.g. from distributed methane sources) and ethylene oligomerization for ethylene upgrading to higher-value chemicals.

Our research is focused on the fundamental principles that govern the catalytic behaviour of zeolites and zeotypes in these important reactions. The effects of acidity, metal functionality, nanoscale confinement, and molecular transport within zeolites are elucidated by employing cutting edge experimental and theoretical tools. Steady-state and transient kinetic measurements are applied to unravel reaction mechanisms. Concurrently, electronic (XAS) and vibrational (IR) spectroscopies are used to characterize active sites that enable these reaction mechanisms. The nanoscale structure of materials is interrogated by X-ray diffraction (XRD) and microscopy (SEM). Experimental studies are conducted in close cooperation with theoretical ab initio (DFT, MD) investigations and advanced synthesis of new catalysts and model materials. 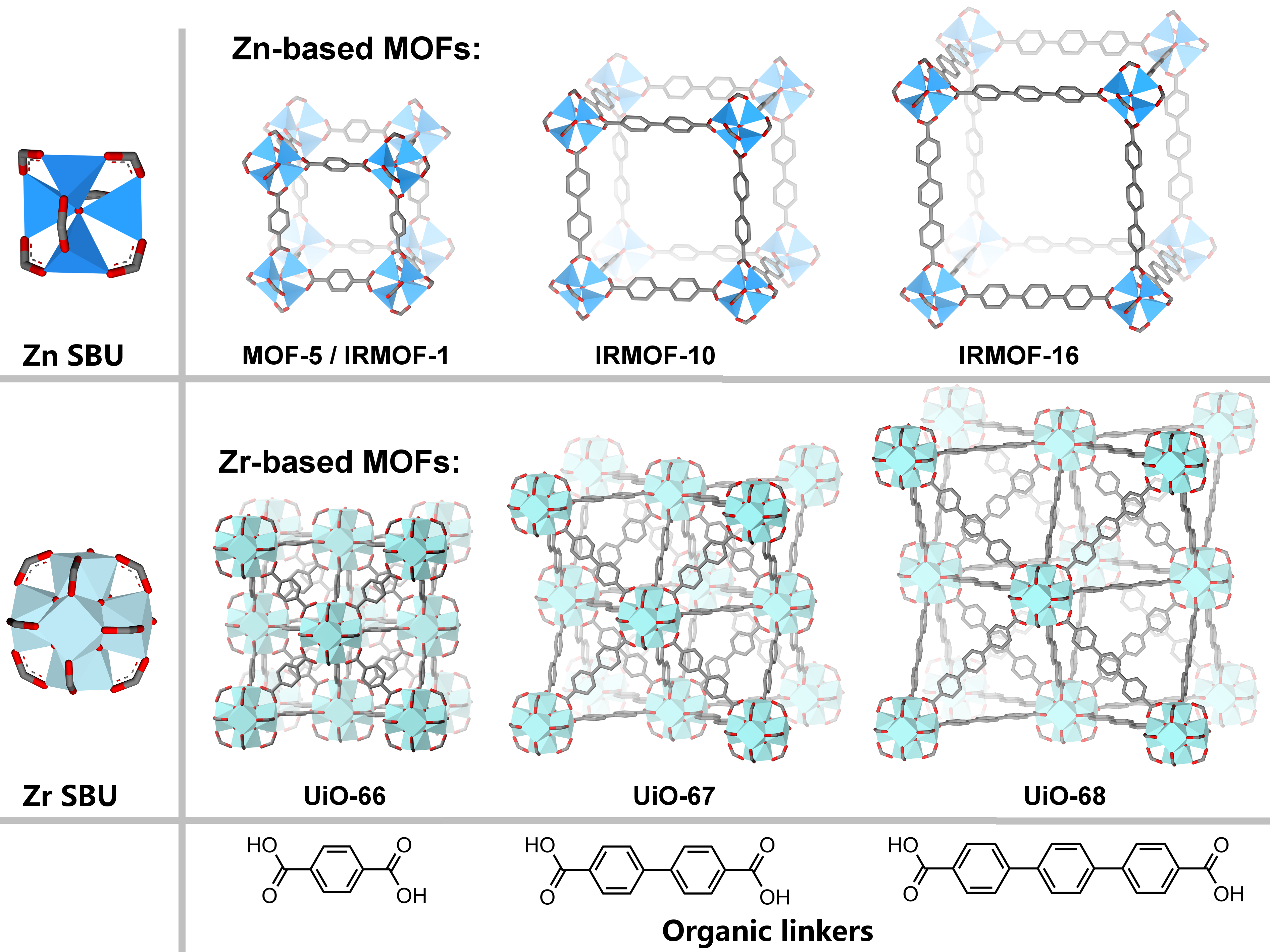 MOFs are crystalline solids consisting of discrete inorganic and organic building units, forming a porous network structure. By using different metal sources and organic ligands, a vast variety of networks can be formed with pore windows in the size range of typically 0.5 to 2 nanometers. The catalysis group at UiO has pioneered a family of thermally and chemically stable Zr-based MOFs (UiO-66, 67, and 68). Our current research is focused on modifying these materials in order to exploit them as efficient catalysis for a range of industrially relevant reactions such as CO2 reduction and natural gas processing. The pore size and chemical environments inside MOFs are tailored to improve selectivity for different substrates. Different catalytic sites are introduced as nanoparticles or embedded in the framework structure itself via chemically functionalized linkers. The group is focused on understanding the fundamental aspects of these materials, including details of their atomic structures (such as defects), and on improving preparation methods.

Our group focuses mainly on small molecule activation using various gold(III) complexes as well as finding suitable catalysts for the copolymerization of epoxides and CO2. Homogeneous catalysis by gold complexes is highly relevant in organic total synthesis, asymmetric synthesis, and C-H activation reactions. While the knowledge about gold(I) catalysts has reached an advanced level, gold(III) catalysis is mainly limited to the use of simple inorganic gold(III) salts. We investigate the reactivity of gold(III) complexes with particular emphasis on catalytic reactions and small molecule activation. Reactivity of organometallic complexes towards CO2 is a particularly important topic in the context of CO2 over production and subsequent release of this greenhouse gas into the atmosphere. We focus on developing homogeneous organometallic catalysts for synthesizing polycarbonates from CO2 and epoxides. In addition to their benefits for carbon sequestration, these catalysts will produce highly valuable chemical commodities from a nontoxic, renewable, and low-cost resource.

Newly developed homogeneous catalysts can be immobilized inside crystalline materials in order to facilitate catalyst reuse and recruit the confinement effects of nanoporous frameworks for steering chemical reactions. Metal-Organic-Frameworks (MOFs) constitute a relatively new class of in which metal ions or clusters are bridged by organic linkers to form 3-dimensional, porous network structures. Organometallic catalytic motifs can be incorporated into MOF structures with atomic precision via functionalized linkers. The major objectives of our group are to assemble UiO-type MOFs with gold(III)-, ruthenium-, and zinc-functionalized linkers and to compare the catalytic activity of the resulting materials with their homogeneous counterparts.

The group is also focusing on the Soai reaction- to date the only known chemical reaction that exhibits asymmetric autocatalysis with high amplification of enantiomeric excess (ee). The chiral product of this reaction enantioselectively catalyzes its own production. It has been suggested that this kind of behavior might have been crucial in the development of homochirality. We are working towards incorporating the catalytic functionality needed for the Soai reaction into MOFs in order to explore the confinement effects on autocatalytic chiral chemical systems.

AROMEX
Production of aromatics from methanol via metal-exchanged zeolites

CASCADE-X
CO2 to light olefins conversion by CASCADE reactions over bifunctional nanocatalysts: an ‘all X-ray’ approach