Darwin Day 2020: Sequencing life – for the future of life

Welcome to the annual Darwin Day lectures at the University of Oslo! This year the topic is connected to the effort to sequence the genomes of all species – and what we can learn from that. This realtes to the international Earth BioGenome Project (EBP) that aims to sequence, catalog and characterize the genomes of all of Earth’s eukaryotic biodiversity over a period of ten years. Read more about the project at earthbiogenome.org. We also recommend the PNAS article "Earth BioGenome Project: Sequencing life for the future of life" (Lewin et al.) co-authored by two of our speakers.

Open for all – no registration necessary. The event is held in English.

Harnessing the power of genomics to secure a sustainable future
Maren Wellenreuther, The university of Auckland, New Zealand (Homepage)

Abstract: During the past twenty years, the world of genetics and genomics has changed dramatically. Through comparative genomics and genetics we have learnt about the evolution of multiple vertebrates and developed a number of them as models for human traits and disease. In 2011, we published the 29-mammals genome projects which aimed to look at evolutionary constraint at a resolution of 12 base-pair elements. As Illumina sequencing became affordable, we put together a project with the goal of detecting human single base evolutionary constraint using >240 mammalian genomes. Of these, 131 genomes were generated at Uppsala University and the Broad Institute using DISCOVAR-de novo, combined with the 110 mammalian genomes in NCBI in March 2017. As this data set is analyzed it will allow the study of: (1) the largest Eutherian nuclear genome phylogeny, (2) the ability to perform genotype–phenotype correlations across many mammalian species, (3) reference genomes that can be utilized for species conservation and finally (4) a detailed map of evolutionary constraint, which can be used with human genome-wide association (GWAS) catalogs and other species data sets to investigate patterns of constraint in disease associated regions in any of the 241 genomes. The data set will also make possible the study of accelerated regions under positive selection in any of the sequenced mammalian genomes.

Bio: Professor Kerstin Lindblad-Toh has pioneered comparative genomics and genetics. She has sequenced and analyzed a large number of vertebrates and developed the dog as a model for human disease. She was a founder of SciLifeLab and is active in research both at Uppsala University and the Broad Institute of MIT and Harvard. She is a member of the Swedish Academy of Sciences.

Lecture title: Genome sequencing across the tree of life – a bird’s-eye view

Abstract: The endeavour to sequence genomes for all living species is now more feasible than ever due to the exponential development of sequencing technologies. When the goal is more than a catalogue of genomic biodiversity but to answer evolutionary and ecological questions, the flood of data provides significant challenges and often requires many specialists to take care of tasks. For this reason, genome consortia have been important in driving the field forward and are now increasingly populating the tree of life with genomes. One of these consortia is the Bird 10,000 Genome Project (B10K) that aims to sequence genomes of all living bird species. Birds are speciose, morphologically and ecologically diverse, and are widely used to investigate evolutionary questions. Comparative analyses usually require a good understanding of the underlying evolutionary relationships, but the bird phylogeny is famously recalcitrant to resolve. The B10K project builds on a productive first phase that analyzed the first 48 bird genomes, which demonstrated how whole genome data can help to understand their evolutionary history and to unveil the genomic underpinnings of their diverse phenotypes. Now, in its second phase, the project is analyzing a suite of 363 bird genomes. Analytical advancements allow us to harness ever more sequence information from the genomes and it is becoming clear that sampling additional genomes is not just a mere addition of data but improves comparative analysis in quantity and quality. At the same time, the B10K started sequencing genomes for its third phase, for which it will generate ~2300 genomes. The logistical, computational and analytical challenges of this project are significant but it holds the promise to decipher genomic biodiversity of birds at increasingly finer levels and brings us closer to sequencing the tree of life.

Bio: Josefin Stiller obtained her M.Sc. in Organismic Biology and Evolution from Humboldt University in Berlin. She then moved to California for her Ph.D. in Marine Biology at Scripps Institution of Oceanography University of California San Diego, studying population structure of the amazing seadragons of southern Australia. This work also resulted in the serendipitous find of a third species of seadragon. She has embarked on adventures collecting marine invertebrates aboard a ship in Antarctica, visiting methane seeps using remotely operated vehicles and scuba diving to collect samples of seadragons. After completing her Ph.D. with a UCSD Chancellor’s Dissertation Medal in 2017, she joined Guojie Zhang’s lab (zhanggjlab.org) at Copenhagen University and the Bird 10,000 Genome Project (B10K). Her current research focuses on using whole genome data from 363 bird genomes to reconstruct a new phylogeny of birds and to better understand how phylogenetic conflict is distributed across the genome. Josefin is also working on evolutionary questions in a number of different animal groups and is honored to have a marine worm named after her.

Lecture title: Harnessing the power of genomics to secure a sustainable future

Abstract: In the Origin of Species (1859) Darwin established the theory of evolution by natural and sexual selection; however, the mechanisms allowing transmission of heritable information were not then known. Nowadays, the role of DNA sequence variation in transmitting heritable changes over generational time has been well established, and techniques are abundant to quantify this sequence variation in both model and non-model species. I will outline how the ongoing development of sequencing technologies has revolutionised the way we can sustainably manage our natural resources by finding causal relationships between genetic variation, phenotypes and the environment. I will also highlight ongoing challenges in the field to describe the full extent of genetic variation that causes phenotypes to vary. Specifically, I will discuss the pressing need to capture sequence variation beyond single base pair changes, including complex structural variants, owing to their large impact on phenotypes. The accurate description of genotype-phenotype relationships is critical, as they inform how we predict the future dynamics of selectively important variation and how to forecast the potential for adaptation to changing environments. Improvements in this area will allow for a more a more systematic exploration of the variation that is causal in evolutionary diversification and adaptation.

Bio: Maren Wellenreuther is originally from the middle of Germany, but always liked to travel and explore. In 2000 she moved to South Australia to do her Master’s thesis at the University of Adelaide on predator foraging behaviour of the Magpie perch. She remained in the southern hemisphere and afterwards moved to New Zealand to explore the ecological factors associated with sympatric species in New Zealand triplefin fishes. After completing her PhD on at the University of Auckland in 2007, Wellenreuther joined a leading evolutionary biology group at Lund University (Sweden) to expand her expertise and range of analytical approaches. She began to integrate field data with experimental approaches and genomic-based methods to document the complex and dynamic ways in which species evolve in nature. She became recognised in Sweden and internationally, was awarded numerous research grants, started her own group, and received a prestigious award from the Swedish King for her contributions to biodiversity. Equipped with a solid theoretical understanding in ecological and evolutionary genomics, Wellenreuther started at Plant & Food Research in 2014 with the knowledge and global collaborative network to develop genomic tools to allow native marine finfish species to be cultivated for aquaculture. For this she received in 2018 the Hamilton Award for research excellence from the Royal Society of New Zealand. She is currently Science Group Leader of ’Seafood Production’ at Plant & Food Research and an Associate Professor at the University of Auckland in New Zealand.

Abstract:  It is increasingly clear that symbiotic microbes not only benefit their eukaryotic hosts through food conversion and nutrient uptake, but they can also have broader effects on their hosts’ morphology, health, and even behavior. They are no longer considered passive passengers but active crew, who can affect and even condition phenotypes in complex organisms, whether plants, invertebrates, or vertebrates. The extent of these effects is so great, that although the two parties have traditionally been studied independently, a new ‘hologenomic’ approach is now being embraced by the genomics community, that jointly analyzes the interconnection between host genomes and microbial metagenomes, and their combined functions. This is now feasible because the genomic revolution enables the generation of multi ‘omics-scale data sets and analysis using novel data-mining methods. Indeed, recent research has showcased the feasibility of applying hologenomics to questions of ecological and evolutionary relevance. Therefore, there is a pressing need to understand how the evolution of complex host organisms is shaped by their associated microbes. Furthermore, now is the time to explore their broader implications in the context of fundamental ecological and evolutionary processes, grand transitions of life, and the history of humans – all topics that are typically attributed to other host-centric features such as genomic variation.

Bio: Tom Gilbert obtained his BA in Biology, then PhD working on Ancient DNA at the University of Oxford. Following this he spent 2 years as a postdoc at the University of Arizona where he developed laboratory tools for studying the origin and spread of HIV-1, using historic samples. Upon moving to the University of Copenhagen in 2005, he built his own research group, first as an Associate Professor in the Department of Biology, before becoming the Professor of Palaeogenomics at the Natural History Museum of Denmark in 2011. Following the break up of the Natural History Museum in late 2018, he was one of the founding members of the University of Copenhagen’s new GLOBE Institute, where he leads both the Section for Evolutionary Genomics and the recently funded DNRF Centre for Evolutionary Hologenomics. His group principally apply both ancient and modern genetic tools (e.g. eDNA metabarcoding, palaeogenomics, genomics and metagenomics) to study ecology and evolutionary genomic questions. In this regard his most recent focus has been the study of life through hologenomic approaches, that is the integration of ‘omics data from both hosts and their microorganisms, something that forms the basis of his DNRF Centre.

* Due to unforeseen circumstances, Guojie Zhang (Homepage) had to cancel his participation. We are very happy that Josefin Stiller has agreed to join us!

Contact for this event: Kjetill S. Jakobsen and Tore Wallem.

This event is part of the Oslo Life Science Conference 10–13 February 2020.

This event at Facebook. There is no registration for Darwin Day, but you can let us know you are coming on Facebook! 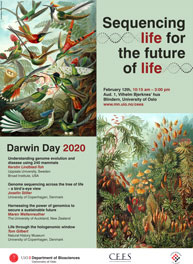 Darwin Day is an international recognition of science and humanity, held in memory of Charles Darwin (1809-1882).